Greg Hackney won the 2014 Toyota Bassmaster Angler of the Year title and could have asked just about any nine people in the universe to be his guests at a round banquet table for 10 at the Bassmaster Classic’s annual Night of Champions celebration Wednesday night.

Hackney chose to invite Kevin and Sherry VanDam as his very special guests.

In some ways it seems curious that Hackney would choose to fill the privileged seats with a fellow competitor just a handful of birthdays older than himself, but for Hackney the decision was actually very logical.

“Are you kidding me, Kevin’s my hero, man!” exclaimed Hackney when asked about his decision. “Kevin was a guy I looked up to before I turned pro in 2001, but when I started fishing against him, I really, really, became impressed by him. He’s done things in this sport, that to me, shouldn’t be humanly possible.”

“Trip Weldon probably put it best at the pre-Classic angler meeting yesterday,” explained Hackney. “Trip pointed to the Classic trophy and joked that there was no way Kevin was going to win this one. Point is, there’s never been an angler in history that was a legitimate threat to win every Classic he qualified for.” 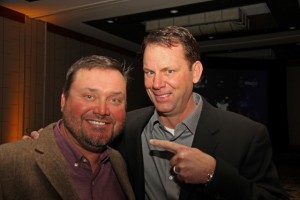 The fact that VanDam did not qualify for what would have been a mind-bending 25th straight Classic is the only reason he’s not a threat to with this one.

Still, in typical VanDam fashion, he’s carried himself with tremendous class and personal character in Greenville this week, and expressed genuine humility over Hackney’s decision to ask he and Sherry to be special guests at his table.

“I was super humbled when he asked me,” said VanDam. “I’ve known Greg a long time. We’ve hunted whitetails together. We work closely with Quantum and Strike King together, and honestly we’re both a lot of like. We both share an extreme passion for both hunting and fishing.”

“When I think of Hackney, I think of a guy who is extremely instinctive,” continued VanDam. “He has a gift for knowing what to do to catch the next bass or fool a whitetail. He does things his own way. He’s a ‘my way or the highway’ kinda guy. And his way is obviously pretty solid,” punctuated VanDam.

“When B.A.S.S. asked me who I wanted at my table, I couldn’t think of a better person than Kevin to sit beside me,” said Hackney. “He’s my hero, but he’s also a great friend too. And honestly, based on what Kevin has done in this sport, he kinda stands alone.”

VanDam stands alone indeed. But Wednesday night in Greenville he had a very special seat.