Kayak Fishing has become one of the fastest growing segments of bass fishing.  As the economy has struggled, bass anglers have turned to a kayak when cost are prohibitive or they want to fish small waters that they can’t 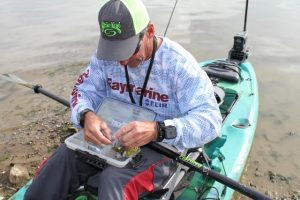 take their bass boats into.

Along with his career as a competitive kayaker, Jackson is an avid angler, and Rob Lever caught up with him at the 2016 Strike King Media event at Kentucky Lake to film this segment.  So, check out our Under the Lid segment with Eric Jackson on the Jackson Kayak CoosaHD.