2010 was a learning year for me. Don’t get me wrong, I learn on the water all the time, but I learned a lot about myself and my style as a fisherman.

I learned that I fished Elite Series and FLW Tour events in different ways. Not that I was saying either one of them was any more important than the other to me. I’m in this business to build a career and make money; lots of money is the goal, in fact one of my mottos is, “I wanna be rich.” The Elite Series and the FLW Tour both give me a chance to win a hundred grand at each tournament, and I think about them both the same way – win and I’m closer to my goals. 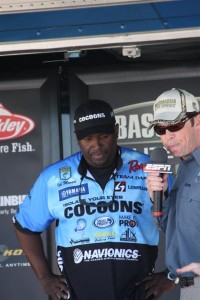 What I found that was a difference was that I practiced differently for Elite Series and FLW events, mainly because I had the time to over think the B.A.S.S. schedule, and had to fish my strengths more in my FLW events because I didn’t have as much time to prepare.

What that meant was I started out low, and couldn’t recover throughout the season. I climbed up to 37th in the standings at one point, but finished a disappointing 60th in the points.

What was different for me on FLW was I didn’t have the time to do anything other than fish my strengths. I would roll into town and pick up my Daiwa Steez Flippin’ Stick, Frog rod or Swimbait rod and do what I do best; Flip Frog and throw a swimbait. I finished sixth in the FLW Tour Points and was in contention to win two events.

So, with that in mind, I’m in the garage now, putting all of the other stuff behind me except for the important stuff, and getting my stuff ready. I’ve replaced all of the baits that need replacing, put new bait holder barbs on my Paycheck Punch Hooks, ordered my new Cocoons and Yamaha jerseys from Gemini, and brought in what I need from Daiwa to hit the road.

The other thing that I did was get the new updated charts from Navionics. They really went above and beyond this year, the new chips are updateable, so I can update them all year with any new information that they might have added to the charts across the country.

I’m waiting for my new Ranger / Yamaha SHO to get here, and when it does, I’ll off to Shasta for the first Western Everstart Series event; the first of my long season. It will be a long one, with eight Elites, four FLW Opens, two Everstarts, a couple of FLW Tour majors and maybe more; we’ll have a lot to talk about.