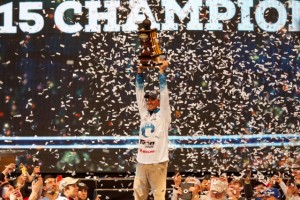 Casey Ashley Held the Bassmaster Classic Trophy Aloft Last Year, who will get to do it in 2016 in Tulsa, Oklahoma?

It’s that time of the year again, the Super Bowl, Daytona 500 of bass fishing is upon us. The Bassmaster Classic is that one tournament a year that seems to grab the attention of even the most casual fan, and the focus of every facet of the industry is squarely locked on Tulsa, Okla. at this point.

AdvancedAngler.com is also thinking about the event, and in fact our on our way to Tulsa, Okla. this week to cover the event. After having some time to narrow down our thoughts, we decided to do our own little preview of the event.

Favorites to Win?
The most often asked question of just about everyone in the media is “who is gonna win the Classic.” Of course the honest answer is, I don’t know, but I certainly have some thoughts as to who to consider as the favorites for the win.

The first two are a little two obvious, but Edwin Evers and Jason Christie should definitely be considered Level 1 threats. Normally, I shy away from considering the home field advantage in a tournament, and I did with both of these anglers in 2013. They were obviously both world class competitors, but there is something about the Classic being in your home state, and on a lake you have a ton of experience on that can get in your head. Both Evers and Christie told me after that tournament that they let those factors influence their decision making process, and they ended up fishing history, instead of the moment; I doubt they’ll let that happen again.

Next, I’ll go with Aaron Martens. After one of the most dominant Angler of the Year seasons in the history of the award, Martens is fishing at his best; which should be scary to competitors. Martens had the kind of season that only Roland Martin, Kevin VanDam, Skeet Reese and Evers have had en route to winning his third Totota Angler of the Year title, and there is no reason to think he will slow down.

Speaking of VanDam, I’d watch out for him. After having a solid Classic here at Grand Lake in 2013, missing his first Classic since the beginning of his career in 2015 and having not stood atop the podium since 2011, VanDam is likely to be very focused.

Reese, Brent Ehrler and Greg Hackney are a trio anglers that I would watch out for because they both know how to win, and have proven to be some of the most versatile anglers on tour right now. In fact, I personally consider these guys in my top five of the best anglers in the business right now, so it wouldn’t surprise me to see them with a trophy. The only caveat here is that this is Ehrler’s first Classic. Sure he’s a big game performer, and has won on the big stage at FLW, but this is the Classic, and we’ll see if he can stay completely focused.

I would also watch out for Jacob Powroznik and Justin Lucas. Powroznik is truly a great fisherman, and Lucas has proven himself to be one of the best young guns out there today. After both of them getting close enough last year at Lake Hartwell to taste it, I think they are a par to watch out for.

Finally, as a dark horse candidate. I think we should also pay attention to James Watson. An Ozark angler who shines in his home area, Watson has plenty of history on Grand, and might just have the right attitude to joke his way past the nerves of the event to frighten people.

My Two Favorite Potential Stories in Tulsa
If I could pick a story line to come out of this Classic, I would have to say there are two potentials I would love to see. The first would be to see Martens win the Classic after four second place finishes in his career. As someone who came up in the business in California, and has known him for more than 20 years, it would be great to see Martens win the Classic.

Secondly, I’d love to see Hackney complete the Pro Tour Title Grand Slam. Hackney is already the holder of the FLW Tour Angler of the Year in 2005, the Forrest Wood Cup in 2009 and the Toyota Bassmaster Angler of the Year in 2014, if he can win a Classic, he would be the first to complete the career pro tour grand slam of titles. That is a historical occurrence I’d love to witness.

Raw Coverage
AdvancedAngler.com will be on hand in Tulsa to deliver our trademarked RAW coverage style which puts the competitors at the forefront. We have always tried to give the anglers the stage by keeping them at the forefront, and not injecting our own opinion into our coverage.

Watch the Live Coverage at Bassmaster.com, and then come over and get the angler’s perspectives on their days as we put a camera in their face after they’ve weighed in and get their side of the story. Of course our coverage will begin from practice, continue on through Media Day and until a champion is crowned – right here on AdvancedAngler.com.