I’ve recently finished filming the final two episodes of Zona’s Awesome Fishing Show and I’m home for my last day of spring break with Karin, Hunter and Jakob before I head back to work on the Elite Series at Pickwick Lake.

My final days of filming were set up somewhere in Arkansas, because I wanted to take advantage of the great Midwestern weather that we all love so much in the spring. That plan backfired; in filming those shows, the temperature never got above 44-degrees. 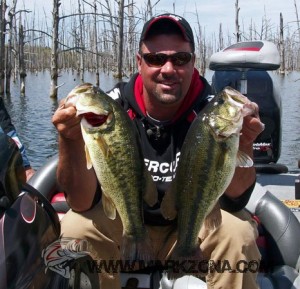 In fact, the whole filming schedule was done in cold weather. Seven of the shows we filmed this year featured water temperatures that were in the mid 40’s. I must say though, that I love a challenge, and with one exception, we rose to the challenge and filmed great episodes; caught some great bass and were happy to put those shows in the can.

That being said, I’ve been there, done that and am not gonna do it for a while. I think I’ve decided that I will have to add some warm weather shoots to the schedule. I’ve always tried to schedule my filming in the offseason between the end of the Elite Series schedule and the Bassmaster Classic, but I’ll have to look at it.

I have to talk about the Elite Series, and the start of the 2011 season. There were some surprises in the first two events, and I have some thoughts overall that I’ll let out of the bag here for a little bit.
Alton Jones and Terry Scroggins sit atop the Toyota Tundra Bassmaster Angler of the Year standings after two events. Those guys had great events in the opening rounds, and they deserve to be where they are; but I’m not sure that they’ll be able to keep up the pace.

For those guys to keep up the pace that they’ve set for themselves means that they’ll have to have the absolute best season of their careers. I’m not sure that they’ll be able to keep it up, and ultimately I think that the AOY race will come down to the obvious choice; KVD and an angler that’s been fishing really well the last few years, and that’s Edwin Evers. Those two guys have started off the season as strong as ever and I anticipate them having strong years.

It’s going to be interesting to see how Skeet Reese is going to do after a slow start at Florida. I think part of it was just the nature of tournament fishing in Florida, and some of it might just have been inevitable when you consider how hot he has been the last several years. I’m sure he’ll find a way to make things interesting and will be making his presence felt by the end of the season.

I’ll also keep talking about the class of rookies that we have on the Elite Series this year, and one of them that is really impressive is Keith Combs. I think Combs is the real deal; he’s articulate, refined and he’s a really good fisherman; I think we’ll be seeing a lot of him in the years ahead.

I want to take a minute to thank my crew on Zona’s Awesome Fishing Show, the guests that helped make it Awesome and the sponsors that help make it happen. This is my seventh year associated with B.A.S.S. and my fourth year doing my own show; and this year has been; well, in a word…awesome; you’re all double rainbows to me.