I just got some boxes in from my sponsors in the past few days, and now my shop looks a lot like Christmas all over again. I’m going to get in there and go through it all like a kid on Christmas morning.

I’ll be organizing and loading the Phoenix and of course the Lunker Lure Express; our fifth wheel camper that’s all wrapped in Lunker Lure colors. It’s really hard to miss Deb and I when we’re driving down the road, or camping at a tournament.

Speaking of Lunker Lure, that’s one new thing I can tell you about. I’m in the final stages of putting together our new Limit Series of Jigs. I’ve worked with them to create a new ball head and shovel head jig that should be pretty cool.

They’re all designed to be in the finesse family, but they have plenty of meat to entice big strikes. The ball head features a light wire casting hook, while the shovel head is more of a heavy wire flipping version. I spent several hours at Lunker Lure the other day working on skirt combinations for the new line. I’m really excited about them, and looking forward to them being ready soon. 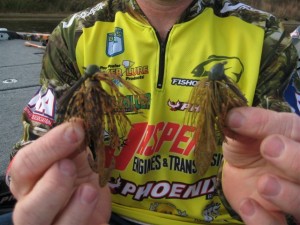 I got to be a part of a meeting the other day about the new plan for the 19,000 acre state park that’s near my house. The meeting included a bunch of politicians; which was really interesting because they had just announced an income tax increase in the State of Illinois, so nobody was really happy about that.

What was really unique about the meeting was that they actually asked the opinion of people who make their living in the outdoors. I got to give them some input on fish management and creel sizes, so it was pretty cool.

I’m working on getting my jerseys done too; it’s going to be Jasper Engines and Transmissions as the main logo with a Fishouflage background and Phoenix, Mercury and my other sponsors on it. There’s a few minor adjustments in positioning, but it’s largely the same.

I’ve been paying attention to the tournament results and the weather trends in Florida. It looks like everything is lining up exactly as I thought. I’ve got three or four areas that I’ll target and it looks like it’s the kind of tournament you’ll have to take a crack at a big bag each day.

I’m looking forward to heading South to get out of this cold weather in Illinois. But, in the meantime, we’ll spend a little time with some friends around here locally because once the season starts, it will be tough to see them very much.

For more on Chad Morgenthaler visit his personal website at: www.chadmorgenthaler.com