We’ve done several articles in the past on the topic of Flipping. We’ve gone over Flipping grass with Bobby and Chris Lane, we’ve talked with Denny Brauer and we’ve even discussed the technique with Ish Monroe. 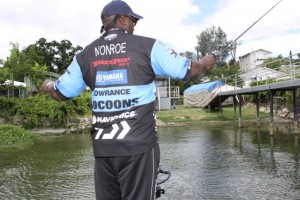 Flipping is a great way to catch truly big bass. Because big bass like to find solitude, burying themselves up in heavy cover is a great way to accomplish that feat. However comforting that is to large fish, it should be equally as comfortable to the angler as well. The nature of these big fish makes them somewhat predictable in locating them.

If it were as easy as simple finding heavy cover and tossing a lure in there, more anglers would be known as Flippers. Learning to present the lure effectively is only part of the game; learning to read the subtle nuances that make Flipping, and Flipping for the RIGHT fish an entire different occupation.
Monroe proved that this past week when he won the Bassmaster Elite Series Power Pole Slam on Lake Okeechobee. On a body of water that was not only dominated by Flipping, it was done so with largely the same lure, and Monroe owned the week.

Monroe’s win was all in the details and his determination, and it is those things that have helped him become more effective as a Flipper.

What Makes a Good Flipper?
Monroe has a theory that many anglers love to Flip, but they do one thing that keeps them from having the best chance at winning more often. “I’ve learned that I need to keep that rod in my hands,” he said. “If I spend time trying to catch a limit first, then I miss opportunities at the right fish.” 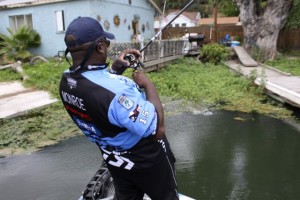 So, when others are out tossing limit baits to guarantee themselves something to weigh-in, Monroe has his trusty 8′ heavy action Daiwa Steez Compile X rod, 7.3:1 Daiwa Zillion Type R reel in his hand. “I just learned that I need to start with it and I have the ability to stick with it,” he said. “Sure I have moments I’d rather forget, but there are times – like last week at Okeechobee – that I couldn’t have done it any other way than to make myself keep the Flipping Stick in my hand.”

Attention to Detail
Monroe said that he believes one of the most important parts of becoming a great Flipper – or fisherman of any kind – for that matter, is to pay attention to details. He said that his West Coast roots have helped him see things in ways he might not have otherwise noticed.

He related that paying attention to the little things is a trait he learned while competing with pros at home on the West Coast. “Look at guys like Aaron (Martens), Skeet (Reese) and John (Murray); they notice little things that make a difference,” he said. “They can be something as simple as how much of a certain color are in a plastic bait that we’re getting bites on, or little subtle things about an area that we’re getting bites in; it’s how we have to compete in the pressure of the Western waterways.”

If he is Flipping a Bruiser Flash colored Missile Baits D Bomb, and he starts seeing that he is getting more bites on lures that have more blue in them; he picks those out of the bag, and if the one’s with more black are generating more bites, he selects those. “Most companies do a good job of pouring consistent products, but all of them have little differences,” he said. “Missile Baits has some of the most consistent baits I’ve ever seen, but I still keep an eye on what the bass are telling me; we have to at home.”

Paying attention to detail doesn’t stop at lures or gear either; he also watches the subtle details in the water. 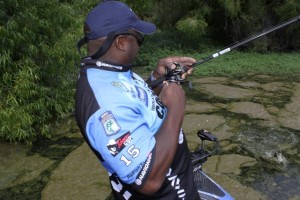 However, there was one subtle little key that he began to notice that helped him further target precisely where he needed to focus his efforts on. “After the sun came up, I started noticing that were light spots (beds) where I was getting bites,” he said. “I couldn’t tell what kind of fish was there, but I noticed that the water was a little deeper in that location.”

As the event wore on, he recognized that his best fish were coming from those little areas that had a point in the reeds with a bed in it. “I realized that they were abandoned tilapia beds, and that the bass were getting into them for the deeper water,” he said. “Tilapia create a large “moon crater” type bed, and the water in them is deeper than that around it.”

That extra six inches of depth was enough to make the bass feel comfortable in the Okeechobee landscape with gusty winds and heavy fishing pressure, and Monroe began to exploit that finding.

Slow Down
He said the biggest problem the average angler makes is that they fish too quickly. He said that not only is the average pace too fast for the fish, but it is also too fast for the angler to read the water. “I’ve been doing this for a long time, so I do it quicker now, but you have to take a minute to analyze a bite,” he said. “It doesn’t take but a couple of minutes, but you need to do it.”

For him, that means setting the hook and after he has gained control of the fish, putting his Power Pole Shallow Water Anchors down. After he lands the fish and puts it in his livewell, he takes a minute to look around the area visually, and then he examines his Navionics chart n his Lowrance HDS unit. “You’d be surprised at the kinds of things you can identify when you take a couple of minutes to take it all in,” he said. “The more that you do it, the faster you’ll get at it.”

Slowing down also means keeping the trolling motor on a low speed and covering water thoroughly, but efficiently. “I hit the high percentage areas until I start to identify the pattern,” he said. “Once I do, I only hit the stuff I know I can catch the right ones on.”

Choosing Weapons
He said he separates his lures by the type of cover he is fishing, but he lets the lure choice dictate the type of line he is going to use. “The cover dictates which type of lure I’m going to throw,” he said. “If there is heavy matted cover, then I go with a Punch rig, but if the cover is a little more sparse, then I go with a jig.” 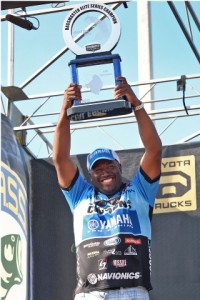 Such was the case at Okeechobee. He had found that the wind had sometimes blown in dead reeds and debris over the points he was fishing; here he chose a one-ounce to ounce and a half River2Sea Tungsten Trash Bomb sinker paired with a Gas Money (black and blue) colored Paycheck Punch Skirt and 5/0 Paycheck Punch Hook with a Bruiser Flash colored Missile Baits D Bomb. If the cover was sparse, he used a one-ounce black and blue Medlock Double Guard Flipping Jig with the Missile Baits D Bomb again.

Because he was using such heavy weighted lures, he always used 70-pound-test Daiwa Samurai braid. But, if his application calls for lighter weights – below 3/4-ounce – he goes with 20 to 25-pound-test Maxima Fluorocarbon line.

Getting Better
The only way Monroe said to get better at Flipping is to do it more and ironically; he believes, it is the same way to win doing it too. “It really is a technique you have to get comfortable with,” he said. “I’ve gotten used to the fact that I’m fishing for only six or eight bites a day because if that’s what it takes to win, then that’s what I’ll do.”