The 2012 Elite Series season is underway, and with two tournaments behind us, I am happy with my start.

Before I get too far. What can you say about Ish Monroe’s win on Okeechobee? I can’t believe the hurtin’ he put on us down there. There’s not too many times you can say you caught 84 pounds of bass and didn’t finish first.

Ish, you did great; congratulations.

Now, back to my two tournaments. We started out the St. John’s River and like everyone predicted, it was a sightfishing tournament, and I mainly fished spawning areas. I didn’t catch all of my fish sightfishing, but where they were positioned, I’m sure they were bedding fish.

I caught most of them on a new bait by Berkley Havoc called a Rocket Craw; which is designed by Scott Suggs and will be available in May. I threw it on a 4/0 TroKar TK 130 Flipping hook and rigged it with a 1/4-ounce Eagle Claw Tungsten weight on my Microhoneycomb Heavy Cover rod with a Victory 701 reel and 20-pound-test Berkley Trilene 100% Fluorocarbon. I would swim that craw around until I came to a good looking clump of weeds and then drop it around the holes. 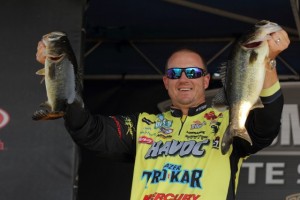 I did catch a few on the bed with a California colored Havoc Pit Boss around beds. I flipped that on 65-pound-test Spiderwire Ultracast braid and a 5/0 TroKar TK130 with a 1/2-ounce Eagle Claw Tungsten Weight. With this rig I used my 8′ Flip / Punch rod and a Victory 701 reel.

Okeechobee was a little bit different. I went to a place called “The Monkey Box” which is a pretty popular community hole on the lake and on the last day of practice caught a six, a four and a three on a Lucky Craft LV100 and expected to blow the tournament away.

When the first day came, I had a bunch of company in the area and the fishing wasn’t as good. I did manage to catch a limit and a five-pounder there, but scrambled and ran to some bed fish I had located in practice. When I got to those bed fish, Jeff Kriet and Pat Golden were already in there. So I started looking for other light spots, and when I spotted one within casting distance of Kriet, I made one pitch and caught a six pounder. That helped salvage the day, although I’m sure Kriet would have rather had that fish.

The next day things didn’t start so well; I only had one keeper in “The Monkey Box,” so, I ran to some nearby Kissimmee grass and managed to catch a 10 or 11-pound limit. After that, I went to the bedding area and found another six pounder that bit on the first flip in sight of Kriet and caught a few others too.

The wind changed on day three so I went to the other side of the lake and when I saw a bunch of tournament boats stacked in an area, I peeled off to a bank and started throwing a new small swimbait I’m working on for Berkley Havoc called a Sick Fish and caught a bunch on it. I made one stop on a six and a half pound bed fish that I couldn’t catch the day before and caught it with five minutes left.

The next day, I tried to catch some fish on the LV 100 and the Sick Fish, but I kept hearing about the jig bite, so I picked up the heavy jig and caught several of them on it. I did manage to get a few on the Sick Fish again, and managed to catch another 22 pound limit.

Overall, I’m really happy with the start of the season. I’ve got 192 points and have a one point lead in the Angler of the Year race over my TroKar / Wright & McGill Co. teammate Brent Chapman. But, it’s really early, we still have a long way to go. I’ll just keep fishing hard and try to keep it going.

Talk to you next week.