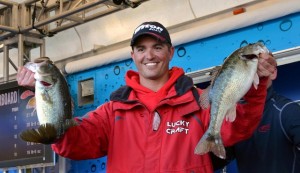 SENECA, S.C. (March 7, 2014) – Professional angler Casey Ashley of Donalds, S.C., brought a five-bass limit to the scale Friday weighing 15 pounds, 13 ounces to extend his lead at the Walmart FLW Tour at Lake Hartwell presented by Ranger Boats. Ashley’s two-day cumulative weight of 37-4 gives him a 2 pound, 12 ounce lead over second-place pro John Cox of Debary, Fla., who has a two-day weight of 10 bass worth 34-8 as the tournament heads into the third day of competition. The field is now cut to the top 20 in the four-day event that features the world’s best bass-fishing anglers casting for the top cash award of up to $125,000.

“It’s been a great two days,” said Ashley, who lives only 45 miles from Lake Hartwell. “This is a dream come true to fish a big tournament on your home waters like this and have it work. The weather has been nasty, but it’s changing every day. I’m just taking it day by day, because I know that the fish are going to change, too.”

After weighing in a five-fish limit of largemouth bass Thursday, Ashley brought a limit consisting of four spotted bass and one largemouth to the scale Friday.

“It took me until 1 p.m. to get a limit today,” Ashley said. “It’s slow fishing. I’m picking off one here, and one here. I was able to fish some new stuff today because the wind blew out of another direction and I was able to fish where I couldn’t get to yesterday.”

Ashley said that he has been catching most of his fish this week throwing a jig and a shaky-head rig. The largemouth that he weighed in Friday came via a swimbait.

“The sun doesn’t really help or hurt me,” Ashley said. “The fish that I am catching are relating to what they relate to for different reasons. They just live there. I’m spending a lot of time in good places.

“I’m looking forward to fishing tomorrow because my hands won’t be cold,” Ashley went on to say. “I hope the sun helps me. The fish are not real active right now. I think that if we get another warming trend we’ll get another wave of them to pull up.”

The top 20 pros that will fish Saturday on Lake Hartwell are:

Davidson won the FLW Big Bass Award and $500 on Friday on the pro side with a fish weighing 5 pounds, 13 ounces.

Fans will also be treated to the FLW Expo at the Walmart on Saturday and Sunday from noon to 4 p.m. prior to the final weigh-ins. The Expo includes Ranger boat simulators, the opportunity to interact with professional anglers, enjoy interactive games, activities and giveaways provided by sponsors, and fans can learn more about the sport of fishing and other outdoor activities. All activities are free and open to the public. Also on Sunday, country music artist Josh Thompson will perform a free live concert on the Walmart weigh-in stage at 3 p.m.