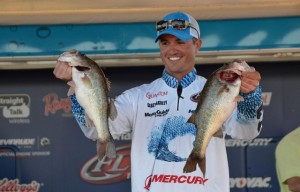 Ashley’s three-day total of 52 pounds, 11 ounces gives him a commanding 9-pound, 10-ounce lead over pro Clent Davis of Montevallo, Ala., heading into the fourth and final day of competition in the tournament that features the world’s best bass-fishing anglers casting for the top cash award of up to $125,000.

“I was really worried because we had such a short day today,” said Ashley, who is seeking his first Walmart FLW Tour win. “I’m not catching a lot of fish in one place, and I’m having to move around a lot. I’ve still got some stuff that I haven’t even fished yet, just because of time. It takes some time to keep fishing how I have been, and there is just not enough time in the day, especially today.

Ashley said that he wasn’t really doing anything special, and most of his fish were still coming on a jig and a shaky-head rig. After weighing in all largemouth bass on day one and mostly spotted bass on day two, Ashley brought a mixed bag to the scale on day three consisting of two largemouth and three spots.

“I’m going to go out there tomorrow and just pound on them,” Ashley said. “If I catch them, I catch them. If I don’t, I don’t.

“I’m really looking forward to tomorrow. This is the greatest feeling ever – to do well in your home state. You can’t take away from winning anywhere, but winning this close to home would mean a lot. Most of the time I have to scratch and claw to get where I’m going. Taking a 10-pound lead into the final day is new to me, but I’m ready for it.”

The top 10 pros advancing to the final day of competition on Lake Hartwell are:

David Redington of Sulphur Springs, Texas, won the co-angler division and $25,000 Saturday with a three-day total of 10 bass weighing 31 pounds, 8 ounces, followed by Todd Lee of Jasper, Ala., in second place with 13 bass weighing 30 pounds, 15 ounces worth $7,500.

“I didn’t have a whole lot of bites this week,” said Redington, who is fishing his first season as a co-angler on the FLW Tour. “But I caught the ones that did. All of my fish this week came on a Z-Man Original Chatterbait with a Lake Fork Tackle Magic Shad.”

Redington’s older brother, Tom, has been fishing professionally on the FLW Tour since 2009.

“I’m used to fishing behind a pro, so that helped me,” Redington said.

Overall there were 30 bass weighing 53 pounds, 1 ounce caught by co-anglers Saturday. No co-anglers were able to boat a five-bass limit.

Fans will also be treated to the FLW Expo at the Walmart on Sunday from noon to 4 p.m. prior to the final weigh-in. The Expo includes Ranger boat simulators, the opportunity to interact with professional anglers, enjoy interactive games, activities and giveaways provided by sponsors, and fans can learn more about the sport of fishing and other outdoor activities. All activities are free and open to the public. Also on Sunday, country music artist Josh Thompson will perform a free live concert on the Walmart weigh-in stage at 3 p.m.