If you own a bass boat, you know that learning to back a trailer down a ramp is a rite of passage. Hence, 21-year old Brianna Palaniuk, younger sister of popular rookie Brandon Palaniuk, was beaming with pride in the bright morning sun inside Ingalls Harbor on Lake Wheeler over the fact that for the first time ever, she successfully backed her brotherâ€™s Skeeter boat down the launch ramp.

Simply being there for her brother is one of the feel-good stories of the 2011 Bassmaster Elite Series season. Brianna, who recently earned a degree in English Literature from North Idaho College, saw an intriguing real-life story unfolding in her brotherâ€™s cash strapped climb from the Federation Nation ranks to admirable success in the Bassmasters Classic this past February, and onward to bass fishingâ€™s toughest trail. 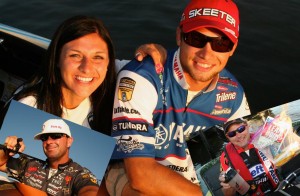 So after attending the first two Elite tournaments in Florida following the Classic, she decided to take advantage of the freedom that youth affords, and began traveling on tour full-time with Brandon. Not just for good company, but also to help him manage the multitude of daily obligations that fuel the fire beneath bass fishingâ€™s biggest pressure cooker.

So far, sheâ€™s served him well, but knew that backing a boat trailer was missing from her list of resources. So Elite Series wives Iris Robinson and LeAnn Swindle graciously offered to coach her. In fact, Mrs. Swindle even brought along orange cones to the private training session the three females conducted yesterday inside the spacious Ingalls Harbor Parking Lot near downtown Decatur.

Considering her maiden voyage this morning played-out in front of fans, and 98 of the top pros in the world, she passed the baptism by fire trailer dunking with flying colors. â€œIâ€™m out here to support my brother, and backing a trailer is just one more small means of support,â€ beamed Brianna. Her brother grinned and added, â€œYouâ€™re the 100th person sheâ€™s told about her achievement this morning, sheâ€™s proud of herself, and Iâ€™m proud of her too.â€

While the Palaniuks shared aloud, Gerald Swindle was grinning and keeping secrets about an eye-catching new prototype reel. â€œIâ€™m not supposed to let anybody see these new reels. Not even my wife. The guys at Quantum would kill me if they knew I let a camera near them. Itâ€™s the coolest series of reels theyâ€™ve ever launched. Itâ€™s supposed to be a top secret until next month at the ICAST Show, but they sent them for me to test, and by golly, thatâ€™s whatâ€™s Iâ€™m doing. So far theyâ€™ve been super smooth and extremely lightweight. Iâ€™ll promise you thereâ€™s nothing out there that looks like them, or fishes like them,â€œ said Swindle, who currently sits fifth in the Toyota Tundra Bassmaster Angler of the Year points race, and palmed the reel to hide its identity.

On the east wall of Ingalls Harbor, sat easy-going veteran pro Mike McClelland popping vitamins, swigging protein drinks and showing-off a Hefty bag of nutrition bars. â€œIts part of the daily routine that sports nutritionist Ken Hoover of Athletes Outdoors prescribes for me,â€ said McClelland. â€œI eat four capsules in the morning, along with a few caffeine energy boosters at mid-day, and some recovery products at the end of the day,â€ he added, just before biting into a blueberry protein bar and idling out of Ingalls into what should be a hot and possibly temperamental portion of Tennessee River known as Lake Wheeler.