A Stones Throw from Home with Marty Stone

The last time the fishing industry at large saw Marty Stone, he was competing on the Bassmaster Elite Series in 2010, but was on the verge of making a tough decision.

Marty Stone was going to retire from professional fishing. 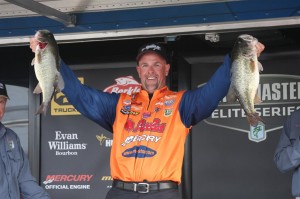 When the season ended, he did exactly that. He stepped away from the sport that had been his business for more than 14 years of his life. He decided that he needed more time with his family; his son and daughter were getting older, and being able to be home with his wife Robin and the kids was more important.

Had Major League Fishing not happened, the Stone’s may not have decided to go back out on tour. “I was content with life the way it was,” Stone said. “I was home with the kids, and I was completely happy doing what I was doing.”

The PBT did not takeoff, but the group of anglers eventually got to see the fruits of their efforts when The Outdoor Channel decided to partner with them and form Major League Fishing. The prospects of what Major League Fishing could become were enough for Stone to reconsider his retirement.

“I didn’t want to sit on the sidelines and look back several years from now wishing I had been a part of what I feel the sport has needed all along,” Stone said. “So, I decided it was time for me to come out of retirement.”

Marty Stone is but a Stone’s throw from being home.

MLF Analyst
While he had originally intended to compete in the first MLF event; the Jack Links Major League Fishing Challenge Cup presented by Busch Beer on Amistad Lake, Stone took some advice under consideration and decided to serve as the color analyst for the show. “Don Rucks, the Commissioner of Major League Fishing, talked to me about doing the on air analysis,” he said. “The more I thought about it, and when Don said that playing this role would help move my career further along faster in my return; I decided to take the assignment.”

In his role, Stone would get the chance to use his familiarity and experience with what professional anglers go through on the water. He would also get the chance to apply his love of sports in general to his commentary; something the producers were looking for. 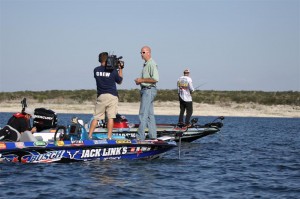 “I’m a sports junkie, and being able to use sports analogies is something that would help the average sports fan relate to fishing competitively,” he said. “By blending my knowledge of fishing with the competitive side of mainstream sports, our hope is that we can relate to sporting fans through fishing.”

One of the ways he did that was to relate things to a basketball game. “Every basketball fan knows that the team that’s behind in a game is going to make a run at the leader at some point,” said Stone. “The leaderboard system in Major League Fishing allowed the anglers to know they were making a charge, or being chased down; so it created additional factors for consideration.”

This; in Stone’s mind, became much different to the standard fishing tournament. He again applied a sports analogy to the topic; this time from baseball. “At a regular tournament, we have no way of knowing the score until we get to the bottom of the ninth inning; the weigh-in,” said Stone. “That’s when we find out if we hit a home run, a single, a double, a triple or struck out – Major League Fishing allows the angler to know the score, and it changes the way we play the game, and deal with the pressure.”

What Did He See?
By being on the water as the anglers experienced the new format of MLF competition, Stone was able to watch as the intensity of the format made anglers do things they normally wouldn’t do, and the spectacle fascinated him.

“I watched anglers do things under pressure that are not consistent with their normal personalities,” he said. “The pressure of the new format and the competition placed additional stress on them in ways they hadn’t experienced before.”

The result was that Stone was able to see things differently than if he was competing. “I took a couple things out of Amistad,” he said. “First; these guys are just really good. Second, there is a difference at our level between angles that mentally have it all together, and MLF brought some of those things to light in competition. I saw some of the best in the business do things that were out of their normal character on the water.

“The closer things get to the pay-per-view airing in a month or so will allow fans the chance to see the things I saw out there,” said Stone.

What Did he Learn as an Angler
The biggest thing that Stone said he takes away from Major League Fishing is that he has to keep working at his focus. “Major League Fishing all came down to managing distraction,” he said. “I see where I need to focus, and learn to further put distractions out of my mind when I’m competing.

A New Direction
Starting from the moment he decided to make a return to professional bass fishing, Stone decided to start new. He retrofitted his home gym, and he began the process of building his sponsorship team again. “Getting ready physically was the easier of the two,” said Stone. “I found out that the business side of things in this economy was the tougher part. But, I’m happy to say that towards the end of the preparation process, things really came together.” 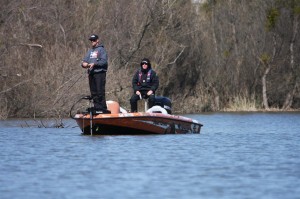 He set some goals for himself for the year as well. “I want to make a check by the time the year is out,” he said jokingly. “Seriously, I want to get to the point where I feel competitive again by at least the halfway point, and my broad goal is to make the Forrest Wood Cup.

Editor’s Note – Advanced Angler is excited to welcome Marty Stone back to the tournament fishing world, and we will be running his blog on Advanced Angler throughout the 2012 season. Follow him as he makes his return to the pro tours on the FLW Tour schedule.

Stone has also recently re-designed his website – MartyStone.com – with the help of The Cox Group; take a look and learn more about Stone’s career and his upcoming season.