Rewind
In stark contrast to the 2005 Bassmaster Classic held only seven months earlier in Pittsburgh, Pa.; which featured the lowest winning weight of all time, the 2006 Classic shattered the other end of the record books.

Aside from being held in February, there was another important change in the Bassmaster Classic for 2006.  The winner’s share of the prize purse was increased to $500,000; up from $200,000 the year before.

Individual big bass records were shattered as well.  Ricky Green caught an 8-pound, 9-ounce largemouth on Lake Guntersville in 1976, and until the first day of the tournament in 2006, nearly 30 days later, that record was also broken four times.

Also significant was the day one disqualification of 2003 Classic Champion Mike Iaconelli for unsportsmanlike behavior.  Iaconelli reportedly had problems with his livewell on the competition vessel provided by Triton, causing his fish to suffer.  Iaconelli worked on his catch, trying to revive them, then kicked the rear light pole in angler and cursed; he was disqualified for the day as a result of his actions.  He was allowed to fish the next day. 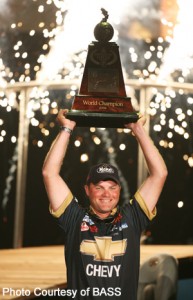 The Winning Pattern:
The first day of the 2006 Classic was dominated by sight fishing.  With the exception of day one leader, Luke Clausen, the majority of the field spoke of spotting their fish in spawning areas, and casting to them until they struck.
Clausen reported that he was blind fishing for his first day’s catch, which led the way with his 29-pound, 6-ounce limit.  Palatka, Fla. pro Preston Clark stood in second after the first round of competition with 29 pounds, 1-ounce.  His catch however included an 11-pound, 10-ounce behemoth that took the capacity crowd at the arena by storm.  The fish became the new record for the heaviest single bass caught in Bassmaster Classic competition.

As can happen everywhere, but especially in the shallow lakes of Florida, an approaching storm front created less than favorable conditions, and the day two results were quite different than the previous day.  Only two anglers weighed in limits over 20 pounds; Ron Shuffield of Bismark, Ark. and Terry Scroggins of Palatka Fla. moved into second and third place with Shuffield’s 21-pound, limit and Scroggins’ 28-pound, 6-ounce limit.
Clausen’s 14-pound, 15-ounce limit brought his weight to a total of 44 pounds, 5 ounces, and was enough to maintain the lead after the second round.

Clausen managed to catch merely 11 pounds, 13 ounces, but it was enough to bring his weight to 56 pounds, 2 ounces.  His final weight was enough to eclipse Davy Hite’s record weight of 55 pounds, 10 ounces during his 1999 Bassmaster Classic win.

Rick Morris, of Lanexa, Va. leapfrogged three anglers in front of him with a 13-pound, 11-ounce catch that came on a new lure called a Chatterbait; which was a jig with a specially made blade on the front to create a compact vibrating package.  The Chatterbait had become a sensation in Florida due to recent regional tournament domination, but blew up even further thanks to  Morris’ high finish.

Clausen reported catching his fish on a six-inch Junebug colored Mann’s Hardnose worm that he cast to isolated clumps of weeds outside of spawning areas. He reported targeting those grassbeds in three to four feet of water in the southeastern portion of Lake Kissimmee.

He told Bassmaster reporters in the press conference following the event that knowing what his area would produce was key. “I probably had the strongest area of the lake and I understood it better than the other guys,” Clausen said. “That was why I won.”

He also said the experience hadn’t hit him.  “It hasn’t really sunk in yet,” said the 27-year-old, who was the youngest competitor at the event. “It’s like you’re in the middle of a dream. It’s surreal.” 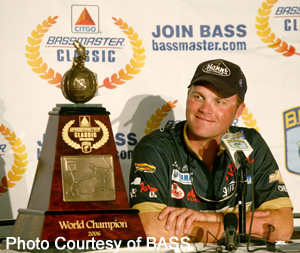 Wrap Up:
Clausen’s winning the event started a difficult situation for the Washington State angler.  He was a long time FLW Tour pro, and had qualified for the event through the Bassmaster Invitationals, and with B.A.S.S. having announced their aggressive Bassmaster Elite Series format for the following year, he would have to make a choice.

The new format would include 11 tournaments, and three majors along the way, and Clausen would have to fish the Elite Series schedule in order to be invited back as the defending champion in 2007 thanks to the Woo Daves Rule.  The “Woo Rule” stated that the defending champion would have to fish the following season in order to exercise their qualification exemption into the next year’s Classic.

Daves elected to go on a speaking tour in support of his sponsors after his 2000 Classic win, and the new rule was adopted going forward.  Clausen elected to fish the FLW Tour schedule in 2006, which made 2007 the first time that a defending champion did not fish the next year’s event.

With all of that stated.  The 2006 Bassmaster Classic was a record breaker, and Clausen won it by getting out ahead early and battling the difficult Florida conditions.  He won in wire to wire fashion, making him only the seventh angler to do so.