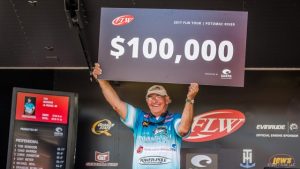 “I’ll tell you what, to finally win my first Tour event is the coolest thing that has ever happened,” said Monsoor, who had eight previous top-10 finishes in Tour competition. “I’ve won a lot of tournaments and awards over the years, but never an FLW Tour event. I could die tomorrow and be a happy man. I don’t want to, obviously, but I’ve had a good life.”

Monsoor said he spent his week picking apart two areas of the Potomac River – a 100- to 200-foot stretch near an area known as Mason’s Neck, and a 100-yard section of water in Quantico Bay. This week, Mason’s Neck gave Monsoor the number of fish he needed to put together limits, while Quantico Bay produced the bigger bites that helped him best the field.

“I started at Mason’s Neck today and like each morning this week, I got a limit by 8:30 (a.m.),” said Monsoor. “I culled one fish and then headed to Quantico. I made the run because I knew it would be out of the wind, and you can’t beat Mother Nature. I figured I’d go to the only place I knew that was protected and that was it.”

Monsoor said he caught two fish from Mason’s Neck that culled before his day concluded.

“The limit-spot in Mason’s Neck was about 2-feet-deep and had black, nasty weeds,” said Monsoor. “The big-fish spot in Quantico Bay was around 4-feet-deep and had clean weeds. I think that’s why the bigger fish were there this week.”

Monsoor said every fish he weighed in during the tournament was caught on a black and blue-colored swimjig with a Yamamoto Baits Flappin’ Hog trailer of the same color.

“It has two tails that flap like an old jig ‘n pig, only this one is cooler,” said Monsoor. “The fish liked the Flappin’ Hog because it wasn’t overwhelming. It was simple – there wasn’t too much going on with it.”

The top 10 pros finished on the Potomac River:

Overall there were 47 bass weighing 128 pounds, 13 ounces caught by pros Sunday. Nine pros brought a five-bass limit to the scale.

Bryan Thrift of Shelby, North Carolina, clinched the 2017 FLW Tour Angler of the Year title Friday after accumulating 1,122 points in the annual Angler of the Year race. Thrift’s incredible regular-season was highlighted by four top-10 finishes including two back-to-back second-place efforts. Along with the title, Thrift earned $100,000 and an automatic berth into the 2018 Forrest Wood Cup.

In FLW Tour competition, pros and co-anglers are randomly paired each day, with pros supplying the boat, controlling boat movement and competing against other pros. Co-anglers fish from the back deck against other co-anglers. The full field of anglers competed Thursday and Friday. Co-angler competition concluded following Friday’s weigh-in, while the top 20 pros based on their two-day accumulated weight advanced to Saturday. Only the top 10 pros continued competition Sunday, with the winner determined by the heaviest accumulated weight from the four days of competition.

The FLW Tour at the Potomac River presented by Costa Sunglasses was hosted by the Charles County Board of Commissioners. The next event for FLW Tour anglers is the final event of the 2017 tournament-season – the Forrest Wood Cup championship.

Television coverage of the FLW Tour at the Potomac River presented by Costa Sunglasses will premiere in high-definition (HD) on NBC Sports Network (NBCSN) Sept. 20 from Noon.-1 p.m. EDT. The Emmy-nominated “FLW” television show airs on NBCSN, the Pursuit Channel and the World Fishing Network and is broadcast to more than 564 million households worldwide, making it the most widely distributed weekly outdoors-sports television show in the world.