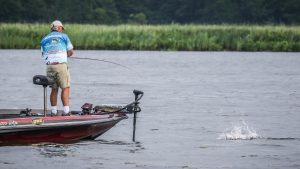 MARBURY, Md. (June 17, 2017) – Yamamoto Baits pro Tom Monsoor of La Crosse, Wisconsin, brought five bass weighing 15 pounds, 5 ounces, to the scale Saturday to retain his lead at the FLW Tour on the Potomac River presented by Costa Sunglasses with a three-day cumulative of 15 bass weighing 51-9. Monsoor will begin the fourth and final day of competition with a slim 2-ounce edge over Brandon McMillan of Clewiston, Florida, who improved from 15th to 2nd in after weighing a five-bass limit totaling 19-7.

“I started at my first spot up north and had a limit by 8:30 (a.m.),” said Monsoor, a 14-year FLW Tour veteran who is seeking his first career-win on the Tour. “After that I headed south to the big-fish area and caught two good keepers that culled. The big bites didn’t happen today, and that’s bad. I’m going to have to do something different tomorrow.”

Monsoor said he caught 12 keepers throughout the day, and that everything he weighed bit a swimjig.

“My limit turned out to be better than I thought,” said Monsoor. “I thought I only had 14 pounds.

“Tomorrow I’m just going to go fishing and try to catch whatever I can – that’s all I can do,” Monsoor went on to say. “I’ll probably start at my limit-spot, but I’ll have to look at the tide. I’ve got one other spot that I haven’t been to yet that I caught a big one from in practice, but it’s not a weed bed, so I don’t trust it as much.”

The top 10 pros advancing to the final day of competition on the Potomac River are:

Overall there were 100 bass weighing 280 pounds, 14 ounces caught by 20 pros Saturday. Each pro brought a five-bass limit to the scale.

Bryan Thrift of Shelby, North Carolina, clinched the 2017 FLW Tour Angler of the Year title Friday after accumulating 1,122 points in the annual Angler of the Year race. Thrift’s incredible regular-season was highlighted by four top-10 finishes including two back-to-back second-place efforts. Along with the title, Thrift earned $100,000 and an automatic berth into the 2018 Forrest Wood Cup.

In FLW Tour competition, pros and co-anglers are randomly paired each day, with pros supplying the boat, controlling boat movement and competing against other pros. Co-anglers fish from the back deck against other co-anglers. The full field of anglers competed Thursday and Friday. Co-angler competition concluded following Friday’s weigh-in, while the top 20 pros based on their two-day accumulated weight advanced to Saturday. Only the top 10 pros continue competition Sunday, with the winner determined by the heaviest accumulated weight from the four days of competition.

Prior to the weigh-in Sunday, fans are invited to come out and experience the free FLW Expo at Smallwood State Park from noon to 4 p.m. The FLW Expo is a great opportunity for fishing fans of all ages to meet-and-greet with top FLW Tour anglers, enjoy games, activities and giveaways provided by FLW sponsors, and learn more about the sport of fishing and other outdoor activities.

The total purse for the FLW Tour at the Potomac River presented by Costa Sunglasses is more than $800,000, including $10,000 through 50th place in the Pro Division. The event is hosted by the Charles County Board of Commissioners.

FLW is the world’s largest tournament-fishing organization, providing anglers of all skill levels the opportunity to compete for millions in prize money in 2017 across five tournament circuits. Headquartered in Benton, Kentucky, with offices in Minneapolis, FLW conducts more than 274 bass-fishing tournaments annually across the United States and sanctions tournaments in Canada, China, Mexico, South Africa and South Korea. FLW tournament fishing can be seen on the Emmy-nominated “FLW” television show, broadcast to more than 564 million households worldwide, while FLW Bass Fishing magazine delivers cutting-edge tips from top pros. For more information visit FLWFishing.com and follow FLW at Facebook, Twitter, Instagram,  and Snapchat.