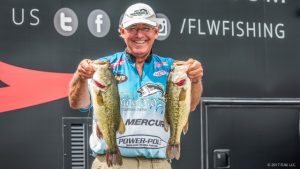 MARBURY, Md. (June 16, 2017) – Yamamoto Baits pro Tom Monsoor of La Crosse, Wisconsin, brought a five-bass limit weighing 16 pounds, 14 ounces, to the scale Friday to grab the lead at the FLW Tour on the Potomac River presented by Costa Sunglasses. Monsoor’s two-day cumulative catch of 10 bass weighing 36-4 gives him a 1-pound, 2-ounce advantage heading into Day Three of the four-day event that features the best bass anglers from across the globe competing for a top cash award of up to $125,000.

“I have two areas – one is about five miles north from where we takeoff, and the other is five miles south,” said Monsoor, a 14-year Tour veteran with 38 career top-10 finishes in FLW competition. “Both areas were packed with boats. Yesterday wasn’t as bad, but today there were boats everywhere.”

Monsoor said that even with the heavy boat traffic he was still able to dial in on productive stretches of water.

The Wisconsin pro said he utilized a swimjig throughout his day, and was able to put 10 keepers in the boat.

“I had a limit by 8 (a.m.) and I culled four of them,” said Monsoor. “After noon I left the two areas alone. I figured I had a decent bag and wanted to let them rest. Hopefully I can get the spots to myself tomorrow.”

The top 20 pros that made the Buck Knives Cut and will fish Saturday on the Potomac River are:

Bryan Thrift of Shelby, North Carolina, clinched the 2017 FLW Tour Angler of the Year title after accumulating 1,122 points in the annual Angler of the Year race. Thrift’s incredible regular-season was highlighted by four top-10 finishes including two back-to-back second-place efforts. Along with the title, Thrift earned $100,000 and an automatic berth into the 2018 Forrest Wood Cup.

Mike Phillips of Clayton, Delaware, caught a 5-pound, 4-ounce bass – the heaviest in the Co-angler Division – and earned the $250 Big Bass award.

The total purse for the FLW Tour at the Potomac River presented by Costa Sunglasses is more than $800,000, including $10,000 through 50th place in the Pro Division.

Prior to the weigh-ins Saturday and Sunday, fans are invited to come out and experience the free FLW Expo at Smallwood State Park from noon to 4 p.m. The FLW Expo is a great opportunity for fishing fans of all ages to meet-and-greet with top FLW Tour anglers, enjoy games, activities and giveaways provided by FLW sponsors, and learn more about the sport of fishing and other outdoor activities.

Youth are also invited to participate in the free FLW Foundation Unified Fishing Derby at Smallwood State Park on Saturday, June 17, from 9-11 a.m. The event, hosted by FLW Foundation pro Cody Kelley along with other FLW Tour anglers, is free and open to area youth (18 years of age and younger) and Special Olympics athletes (all ages). Rods and reels are available for the first 50 participants to use, but youth are encouraged to bring their own if they own one.