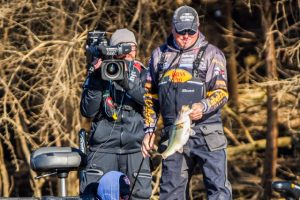 RALEIGH, N.C. (March 27, 2019) – Heading into the second Shotgun Round of the Favorite Fishing Stage Three Raleigh presented by Evinrude, Major League Fishing® (MLF) Bass Pro Tour pro David Walker had a suspicion that the conditions on North Carolina’s Jordan Lake were setting up for his wheelhouse.

With dropping, dirty water and nighttime lows that dipped near the freezing level, the east Tennessee pro put his faith in two old-school techniques that he’s built a healthy professional living on: flipping a jig and winding a spinnerbait.

His faith in that 1-2 punch paid off as Walker flipped and wound his way to 47 pounds, 6 ounces on 15 fish to finish on top of the Group B Shotgun Round.

Walker did the majority of his damage early in the day, when the water was its coldest. Throwing a chartreuse-and-white spinnerbait and flipping a Moccasin Craw Z-Man CrossEyeZ jig with a BatwingZ trailer, the Evinrude pro stacked over 32 pounds on SCORETRACKER™ in the first period, weighing in 10 scorable largemouth.

He highlighted his day with an 8-6 an hour into the competition, the Berkley Big Bass of the day, and put himself in strong position heading into his Elimination Round on Falls Lake.

“This is a best-case scenario, because out of the two practice days, Falls was by far my worst,” Walker said. “I really struggled on Falls. So to have a good start going into that is very helpful, because if not I would have felt like I was behind trying to play catch-up on that lake. I’m not saying that I’m safe or that I’ve made it (out of Elimination), because in this format they just keep catching them. It’s relentless.”

Change of Venue for Elimination Rounds

The field of 80 will carry their Group A and B Shotgun Round weights to Falls Lake tomorrow and Friday for the Elimination Rounds. That fishery – a 12,000-acre impoundment of the Neuse River located 30 minutes north of Raleigh – has hosted a handful of BLF events, and produced a handful of 8-plus-pounders in the first local/regional events of the year in early March.

Like Jordan, Falls is a river lake that holds an abundance of wood and rock, with fish in similar pre-spawn staging.

“Falls Lake is unique enough that guys will have to start over,” said MLF NOW! analyst Marty Stone, a veteran of the Raleigh-area fisheries. “Falls is going to be a little bit of the unknown; it’s been three days since these guys practiced there, and the conditions are changing by the day … heck, by the hour. Fish are coming to the bank. The bottom line is that we’re going to have another really good lake, these fish are going to be shallow, and they’re going to bite.”

How, When and Where to Watch

To see all results from Shotgun Round Group B anglers, and to keep up with cumulative results throughout the week, visit MajorLeagueFishing.com and click “Results.”

Founded in 2011, Major League Fishing (MLF) brings the high-intensity sport of competitive bass fishing into America’s living rooms on Outdoor Channel, Discovery, CBS, CBS Sports Network, World Fishing Network, Sportsman Channel and on-demand on MyOutdoorTV (MOTV). New for 2019, the Bass Pro Tour consists of eight events and a championship streamed live on www.MajorLeagueFishing.com and MOTV. MLF uses the entertaining and conservation-friendly catch, weigh and immediate-release format where every scorable bass counts and the winner is the angler with the highest cumulative weight. For more information on the league and anglers, visit www.majorleaguefishing.com and follow MLF on Twitter, Instagram and Facebook. For more in-depth coverage, see Game & Fish magazine, the official publication of MLF.