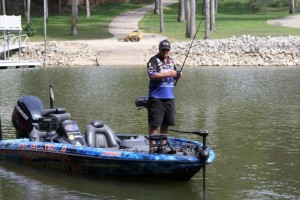 Denny Brauer at the Ready – photo by Dan O’Sullivan

By now, the bass in most of the lakes around the country are in some phase of the spawn.  Whether they are just heading there in the north, getting there in the middle or on their way out in the south; the spawn is the focus this time of the year.

For bass fishing legend Denny Brauer, this is the time of the year he turns to a technique that he is arguably the best to have ever done; he starts Flippin’ boat docks.

If a poll were taken amongst the tour level competitors as to which angler was the deadliest when it came to targeting docks with a Flippin’ Rod, the vast majority would mention Brauer at the top.  The combination of Brauer, boat docks and Flippin’ is the stuff of lore.

No one has done it better than he has, and now is when he starts drooling for the opportunity to do it.

“This is certainly one of the times of the year that a guy can do some damage on docks,” said the 1998 Bassmaster Classic Champion.  “Bass will stage on them going in to spawn, and again on the way out, so you can catch them at any phase of the spawn on the pilings of boats docks.

What Docks to Target
One of the biggest questions that Brauer is asked when discussing the topic of choosing boat docks is how does he select which boat docks he targets.  His primary response is to take into consideration the part of the season he is in, then look at the bank around them.

In other words, he said that he takes a look at the surroundings, and if it is a likely spot for bass to be without a dock, then you throw the dock in it; he wants to fish it. 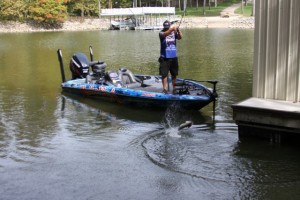 Why Docks in the Spawn?
Brauer said that docks provide bass several things that they need, which makes them use docks around the spawn.  Of course, the obvious thing is that it provides cover, but it also provides feeding opportunities because of what is around the docks.

“While they use them for the shade and the complex cover that docks provide, but there is more to it this time of the year,” he said.  “The bluegill start to spawn after the bass do, so they hang around in the shallows and the bass feed on them around the dock posts and the brush that is around the docks.”

Dock Weapons
Brauer separates his dock Flippin’ weapons by the period of the spawn he is fishing in as well as water clarity.  In the earlier prespawn phase, he tends to use a Strike King Premier Pro Model jig with a Strike King Chunk or Rage Craw depending on the water temperature, his magic number there is below or above the 60-degree mark.  However, if the bass have gone through the spawn and are into the postspawn phase, he turns to a Rage Craw or a Denny Brauer Flippin’ Tube.

“They seem to respond to the jig better in the prespawn period because they are aggressive,” he said.  “But in the postspawn they respond to the Rage Craw better and the tube when things are a little tougher.” 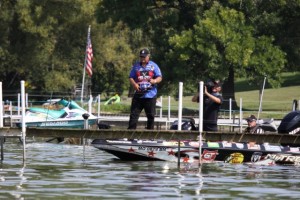 He rigs his baits on a 7’6″ Ardent Denny Brauer Pro Series Flippin and Pitchin stick which he pairs with a signature Ardent F700 reel.  He fills that reel with 25-pound-test Seaguar Tatsu Fluorocarbon line and when the water is shallow or a little cooler, he chooses a 3/8-ounce Strike King Tour Grade Tungsten Sinker, which he upgrades to 1/2-ounce when the water is deeper or he feels that bass respond better to a faster falling bait.  He rigs the Rage Craw on a 4/0 to 5/0 Mustad Grip Pin Flippin’ Hook and the tube on a 4/0 to 5/0 Mustad Tube Hook.

Colors are chosen by water clarity.  In clear water, he goes with green pumpkin, in stained water he likes black and blue and in dirtier water he opts for the Texas Craw color because it has good contrast and some chartreuse in the skirt.

Take it Easy – At First
Brauer said that effective dock fishing can be a slow and methodical process in the beginning; however, it can become one of the most efficient ways to fish after you figure things out.  “You really have to target each post of a dock and pay attention to all the details initially,” he said.  “Every bite is going to give you some clues that you can use to identify the exact 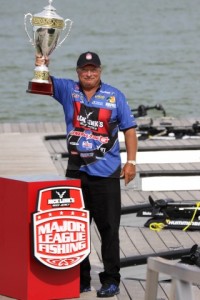 pattern, which will allow you to move faster.”

He starts by Flipping to each post on a dock, and pays close attention to where the bites come from.  After he figures it out, he targets only that element of the docks.  “You have to figure out if the bites come on the windy side of the dock, or the calm, the shady side of the posts, or the sunny side, the deeper posts, the shallow posts or some other element,” he said.  “They could come off of ladders, lower units of outboards or brush submerged around the docks.  But, once you figure out what they are on, you can run through docks fairly quickly and efficiently.”

Wrapping Up
Brauer said that when given the right amount of attention to the details,  docks can be the most productive cover on a lake, and Flippin’ may be the best way to get the biggest bite.  “Docks and this technique were made for eachother,” he said.  “I owe a great deal of my success in my career to putting this puzzle together, and anglers that send the time to figure t out for themselves can improve the number and quality of fish they catch around the spawn as well.”

Brauer put his years of experience on display at the Major League Fishing Summit Cup on Chautauqua Lake in the summer of 2012.  The event was on a lake lined with boat docks, and his technique proved to be the dominant one in the championship round.

In a field of six anglers that featured some of the best young Flippers, Brauer lapped the field and nearly doubled the weight of the second place finisher.  No one will pick up a Flippin’ Stick and immediately begin dominating the way Brauer does, but with his tips, and some time on the water, we can begin our process towards becoming a master at that technique too.