AdvancedAngler Fishing Tip – Pick Up a Dropshot for Tough Conditions 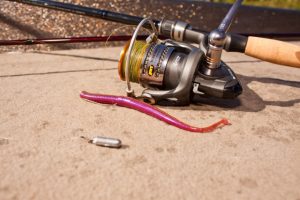 When it comes to fishing in the late fall and into the winter, you’re probably more inclined to put the boat in the garage and tinker with tackle in front of a warm fire than to actually go fish with it.  Let me tell you that you’re missing one of the best times of the year to learn and catch numbers of fish on a finesse technique like a dropshot rig.

I’m not going to lie and tell you that it’s easy fishing, but once you locate a bunch of fish, you can catch numbers of them with the dropshot rig.

A dropshot rig is ideally suited for tough conditions, but especially the cold weather months.  The reason is because bass often suspend above the bottom when conditions are less than favorable.  In this Lucky Tackle Box shipment, you have received a package of baits that are shaped like a small minnow, and when rigged with a simple nose hook and a dropshot weight, you can catch bass now.

This rig works best on light line, on a Team Lew’s or Duckett Micro Magic Pro spinning rod with six to eight-pound-test line on a Team Lew’s spinning reel, and I prefer a quality fluorocarbon offering like Seaguar Tatsu for this presentation.  If I’m fishing deep, but vertically, I prefer to use 15 to 20-pound-test Smackdown Braid with a six to eight-foot leader of Seaguar Tatsu tied with an Albright Special splice knot. 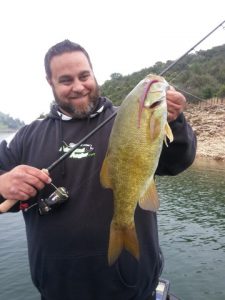 To rig the dropshot, tie a small dropshot hook like a size 1 Mustad Gap Dropshot or a 1/0 Mustad KVD Drip Pin Hook around grass and brush approximately 12 to 18 inches up the line from the tag line with a Palomar knot.  Leave the tag end of your line long, and drop the tag end back through the eye from the top.  Clip a small 3/16 to 1/4-ounce River2Sea Tungsten Tear Drop or Strike King Tungsten Dropshot Weight dropshot weight to the end, and nose hook the worm or minnow to the Drop Shot Hook and Texpose the worm on the offset hook.

I really like three different lures on my dropshot rigs.  In typical situations, a 6-inch Gene Larew TattleTail Worm by John Murray is excellent and I also really like the Strike King Dream Shot worm, especially when targeting fish around bait.  When the bite is really tough, it’s hard to beat the Missile Baits Drop Craw because the small profile excels in tough conditions.

The trick is to fish it slowly. If you are a boating angler with some mobility, look for main lake points, steep walls and offshore rockpiles, humps or vertical timber to target with your casts.  If you are a bank angler, try starting near the deeper end of your impoundment near some sort of bottom structure or hard cover in the water to make casts near.  Remember that your lure is nose hooked with an exposed point, so do not cast directly into the cover, but next to it.

Let the lure settle to the and then slowly lift your rod tip and shake the worm on a semi-taut line in the water column while the sinker maintains contact with the bottom.  Slowly move the rig along the bottom, pulling it a few inches at a time towards you, and you should be able to get bites in cold weather, or tough conditions as a whole.

Some of the best anglers in the world, those who make their living fishing on the pro tours have learned to use a dropshot rig as one of their “go-to” applications because it is such an effective fish catching tool; especially in tough conditions.  With a little bit of practice, you can be catching bass yourself every time you go fishing with a rig like this.