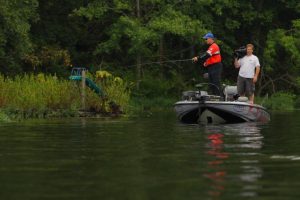 It is a vivid moment when an angler lands their largest bass of their career. My moment came during the 1997 BASS Megabucks event held on Richland Chambers Reservoir near Corsicana, Tex, a March prespawn tournament was shaping up to make history.

Day one of the event saw me land nearly 17 pounds of bass and I was firmly locked into the top 20 in the standings. The second morning saw the perfect storm brewing. Low overcast covered the area, and a light wind from the North rippled the water. The moon was cresting to full in a day or two, 53-degree water was high in the flooded sage grass and was slightly stained.

This was the perfect kind of day for the big females to move to the bank to spawn. I pointed my boat to the area of the successful catch from the previous day, guided only by “dead reckoning” as my flasher was the best technology available. A brisk ten minute run through scattered fog and a few rain drops had me in the area.

I reached for a 1/2-ounce Cantaloupe colored spinnerbait with a Colorado/willow leaf blade combination. The second cast of the morning was placed on the right side of a hardwood tree standing in deep water along the last turn of a creek channel.  The gold blades vibrated in four feet of water and I received a solid strike; I set the hook. The fish streaked to the right away from the tree, and it was strong. I stopped her on the initial run and lead her back to my co-angler as he lifted the bucket mouth in to the boat; we were stunned at her size.

As I beached my boat for weigh-in, Ron Shuffield parked his rig along side of me. “How did you do Mark?” he asked.

I replied, “Four today one fish shy of the limit.”

“Any good ones?” Shuffield responded.

“I have a giant in the well,” I replied.

I pulled my other three out of the well and placed them in my weigh-in bag. Shuffield was startled by bass number four.

The bass weighed in at 13 pounds, 9 ounces, eclipsing the previous B.A.S.S. record by three-quarters of a pound.

With that fish, I rode into my first Bassmaster Classic qualification on the blades of spinnerbaits. That and several other top finishes that season with the lures made me a spinnerbait junkie!

The spinnerbait is one of the most versatile lures in an angler’s tacklebox. It is at its best in stained waters. As our nation’s waterways have become clearer and aging reservoirs have passed much of the sediments through 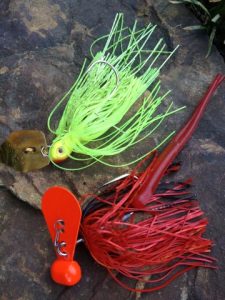 the system leaving mostly rock and gravels with little sediment for water color, anglers have gotten away from them as a primary tool. The spinnerbait still has periods of productivity, but it is just in smaller niches during the year.

While the spinnerbait has waned slightly, the bladed jig has opened new avenues for covering “spinnerbait-like” waters.

Bladed Jigs
Vibration is the major key to Strike King’s Pure Poison or Rage Blade, and this characteristic can turn a neutral bass in to a feeding bass. I believe that the main reason is that the sensory overpowering of the bass can be accomplished by the bladed jig. This is a major difference in comparison to a spinnerbait.

The spinnerbait can only be retrieved at a slow speed to achieve maximum vibration with the right blade shape. But, as a rule, high speeds can only achieved by using willow blades for the spinnerbait because they produce the least amount of vibration of all spinnerbait blades. Bladed jigs produce much more vibration that that of any spinnerbait.

The higher magnitude of the vibration of a Pure Poison bladed jig is nearly the same in reference to retrieve speed. Combine a thinner more compact profile, speed, and vibration anglers can literally bull doze reaction bites from bass.

Water Temperatures
Bass tend to be in neutral moods in various water temperatures and as a result colder temperatures will limit the distance a bass will pursue a moving lure. This is due to the bass being a cold blooded creature. Its metabolism is directly related to the external temperature of its surroundings. However, even in those conditions, they will still strike when provoked!

Another phenomena occurs due periods of high water temperatures. The bass will conserve energy and become less active in hot water (85 degrees and up). Even though their metabolism is in high gear, the strike zone will be very small. The bladed jig can still awaken a neutral bass in high water temperature as well.

In both of these situations a bladed jig produces and extreme amount of vibration through the water column. The excessive pressure waves produced by the bait will cause a reaction bite by the bass. 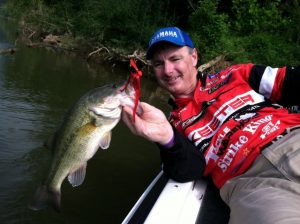 Color
Bladed jigs are effective in a wide range of colors. White, or chartreuse and white mimic bait fish colors while darker, skirted offerings can also mimic bluegill, perch or bottom dwelling prey. This is a valuable stray from typical skirts found on safety pin baits. This also gives the angler a close contrast of bait found in grass beds or in areas of few shad.

Bright sunny days can put a damper on the productivity of a bladed jig. The flash of the blade may be too much under bright conditions. Anglers can choose a painted blade on the bladed bait or utilize a marker to dull the blade of this type bait.  This is a 180-degree change in the thought process for selecting a spinnerbait as they are typically used with bright flashy blade combinations. Dulling the bladed jig’s blade is a top secret of many Elite Series anglers.

Trailers
Experimentation with trailers for bladed jigs is a must. Swimbaits, Swimming Caffeine Shads, Rage Grubs and other plastics lend more action and create a larger profile, while the addition of a Strike King Game Hog creates a swimming illusion of that of a Bluegill. Subtle color combinations from the skirts and soft plastic trailers can be created to match the local prey in your area.

Tackle
Bladed Jig combos can range from 1/4-ounce to over an ounce.  A 7’ 3” medium-heavy Lew’s Custom Speed Stick Football Jig casting rod exhibits enough tip for casting accuracy, but has the needed butt section to deliver power to stop a bass from bulldogging its way back into heavy cover.

A 6.4:1 Lew’s Team Lew’s Lite is perfectly designed to handle this type of lure, because this ratio allows for slow rolling of the lure and control higher in the water column.

I feel that the bladed jig performs at its best with braided line. The sensitivity and lack of stretch found in 30lb Seaguar Kansen Braided Line is a major advantage to the angler. Many times the bass will slap at the vibrating lure, and the lack of stretch in the braid can help an angler snap set the rod and land more of these types of strikes. A trailer hook will also up the landing percentages of the bladed jig when the cover is not so heavy as to gum up the stinger hook.

A spinnerbait is a lure that has historically provided excellent results. But, by adding a bladed jig to the arsenal, the angler can utilize a power bait like a bladed jig in many situations.

Like I did with a spinnerbait years ago, don’t be surprised if you create a bit of personal fishing history with a bladed jig!