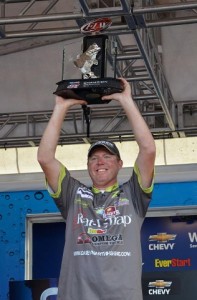 DAYTON, Tenn. (June 30, 2013) – Rookie pro Casey Martin of New Hope, Ala., brought the biggest stringer of the tournament to the scales Sunday, a five-bass limit weighing 30 pounds, 1 ounce to win $125,500 at the Walmart FLW Tour at Lake Chickamauga presented by Chevy. Martin’s four-day catch of 20 bass weighing 103-3 is the second-largest stringer ever weighed in FLW Tour competition.

The four-day catch gave Martin the win by a stunning 22-pound, 11-ounce margin over Walmart pro Wesley Strader of Spring City, Tenn., who caught a total of 20 bass weighing 80-8, earning $33,287. It was the second-largest margin of victory in FLW Tour history.

“Never in my wildest dreams did I think that I could win,” said Martin, who earned his first career victory on the FLW Tour as a pro. “Every night I went to sleep thinking that I was going to stumble, or run out of fish. I really managed my fish well this week, and I think that was my key to winning.”

Martin said his main bait this week was a five-arm Picasso Bait Ball Extreme umbrella rig. He modified it so that it consisted of 3 hooks and 10 dummy-heads. Martin rigged Strike King Shadalicious swimbaits and Zoom Swimmin’ Super Flukes on the umbrella rig. Twelve of the 20 bass that Martin weighed in came on the Bait Ball. Five bass came on Martin’s drop-shot rig with a green pumpkin-colored Roboworm, and he also caught fish on an Ozark Special-colored ¾-ounce Omega Custom Tackle Football Head jig and Castaic Jerky J swimbait.

“For whatever reason, those fish really wanted that Picasso Bait Ball Extreme on day two,” Martin continued. “Guys all around me were throwing umbrella rigs, but I was the only one who was catching them.”

Casey had two main areas that produced for him during the tournament. One he dubbed the “mega-school” where he would catch a solid limit each day, and the second he dubbed his “big-fish spot” which he would sneak to and upgrade.

“The mega school was on a giant ledge, from 15 to 25 feet deep,” Martin said. “I found it on the final day of practice. There was a little turn on it where the fish would just stack up and suspend. I’d go there and get a solid limit, and then sneak into the big fish area when no one was looking.”

Martin described his big fish area as a long point that separated two spawning bays. He said that the big fish were funneling out each day.

“I knew there weren’t many in there, but I knew that if I did get a bite, it was going to weigh between 4 and 8 pounds,” Martin said.

“It’s been a crazy year,” Martin went on to say. “I didn’t even think that I was going to make the Forrest Wood Cup coming into this event. I was never really comfortable at all today. I saw Michael Neal weigh in a 40-pound bag earlier this year, so I just kept going. I went from having an average season to an unbelievable season real quick.”

Overall there were 50 bass weighing 187 pounds, 9 ounces caught by pros Sunday. All of the final 10 pros caught five-bass limits.

Andy Morgan of Dayton, Tenn., wrapped up his season-long quest for the Walmart FLW Tour Angler of the Year title presented by Kellogg’s in front of his hometown crowd. Morgan’s tournament finish of 7th place on Sunday clinched the first Angler of the Year title of his career after finishing in the top 10 in each of the last seven FLW Tour seasons. Morgan, who received $100,000 for the title, also will receive an automatic berth into the 2014 Forrest Wood Cup.

Drew Benton of Panama City, Fla., was awarded the 2013 FLW Tour Rookie of the Year award, which is awarded to the rookie pro angler who finishes the season with the highest point total.

Co-angler Richard Peek of Centre, Ala., clinched the 2013 Walmart FLW Tour Co-Angler of the Year presented by Kellogg’s title with his 31st-place finish. For winning the prestigious title, Peek earned a new Ranger Z518 with a 200-horsepower Evinrude or Mercury outboard plus an automatic berth into the 2014 Forrest Wood Cup.

The Tour stop on Lake Chickamauga presented by Chevy was hosted by the City of Dayton and the Rhea County EDC and was the sixth and final event of the Walmart FLW Tour’s 2013 season. The 2013 Forrest Wood Cup presented by Walmart will be the next tournament and will be held Aug. 15-18 at the Red River and Shreveport, La. The event will be hosted by the Shreveport/Bossier Sports Commission. Boats will launch from the Red River South Marina in Bossier City, La. Coverage of the Forrest Wood Cup will be broadcast in high-definition (HD) on NBC when “FLW” airs Sept. 29 from 2:30 p.m.-3:30 p.m. ET. For a complete schedule, visit FLWOutdoors.com.