A Family Affair with Micah Frazier

2012 proved to be the coming out party for FLW Tour pro Micah Frazier. 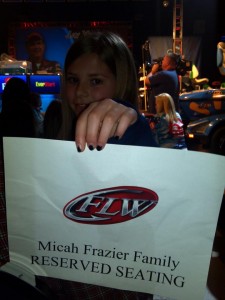 The second year pro qualified for his first Forrest Wood Cup as a professional after making trip to the big FLW stage in 2010. He finished second in the first tournament of the year at Lake Hartwell, and he placed in the money in five of the six FLW Tour Majors in the season. At season’s end, he ranked 28th in the points.

Including his 27th place finish at the Lake Lanier Forrest Wood Cup, Frazier deposited over $80,000 of FLW Tour Level paychecks into his bank account. Add that to a check of over $7,000 in a single entry into an Everstart Northern Division event and another $1700 in a BFL on Alabama’s Lake Eufala, and the young man had a very solid year.

They say that the bass angler leads a lonely, and to achieve great results, the angler must live a focused, solitary existence that the great athletes seem to have been able to develop in order to succeed.

Not so with Frazier. The Newnan, Ga. pro has the full support of his family, and in fact, Frazier’s career has become truly a family affair. “Fishing has always been a family activity with us,” said Frazier. “My grandfather on my Mom’s side and my dad got me into fishing, and now we are all in this together.”

Starting Out
Before the family had a boat, he would fish with his father and grandfather on small waters, but all of that changed before he hit his teenage years. “We got a center console boat when I was 12 and we started saltwater fishing then,” he said. “We fished for snook, redfish, speckled trout, and even the occasional tarpon. In fact, I caught my biggest tarpon, a 150 pounder out of that boat; it took us more than an hour and a half to land it.”

As the evidence of his love for fishing grew, Frazier’s dad helped him get his first bass boat, a Ranger, when he was 15 years old, and before he was old enough to drive on the road, he was connecting with friends who had trucks to get him to the lake.

At 16 years old, after he began to drive, Frazier won a BFL event on West Point Lake. The event was only his third entry into tournament fishing and he thought he was on his way to stardom. While the next few years proved to be a learning experience, he knew what he wanted to do. 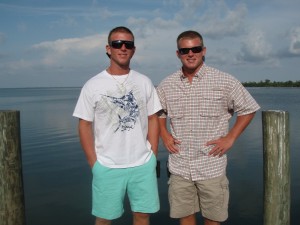 Family Support System
Frazier said that he is blessed to have the full support of every member of his family. “My family is behind me all the way,” he said. “My dad, my mom, my brother and my fiancé Anna all do their part to make sure I am ready to compete.”

For his part, Frazier’s father actually travels with his son every chance he gets. That has meant that much of the past two years, his father has been on tour with him. When he goes, he has a very positive effect on Frazier. “Dad really helps me keep my head screwed on straight,” he said. “This sport is hard enough when things are right, but if they go wrong, then it can be almost impossible to be successful; he keeps me pointed in the right direction.”

His brother, who is a college baseball player, goes to as many events as he can around his own schedule, and for Frazier, who fishes local tournaments with his brother, there is a real sense of comfort from having his brother there.

He said that his mom does not get much of a chance to follow the tour in person, but she does what mothers do, she supports with all of her heart from home. “She watches on the Internet, and she’s always there for comfort when I need her,” he said. “I was having an especially stressful event recently, and she sent me a text of encouragement; which is not her normal way of doing things, and that meant a lot to me and helped settle me own.”

Along with his birth family, his fiancé Anna tags along too, but instead of just hanging around to be with Frazier, she fishes as hard as he does. “She’ll be on that deck matching me cast for cast,” he said. 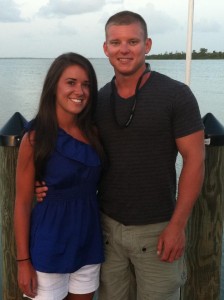 True Perspective
While he is living his dream, Frazier has not lost perspective on the position that fishing plays in his life. “I don’t want fishing to become the most important thing in my life,” he said. “My family’s support and being there with me helps me remember what the important things are.

“Fishing is my job and I love what I do,” he said. “But, ultimately, I don’t need this to make me happy, I have a tremendous amount of support from people that I love. A lot of guys out there can’t say that, and that makes this okay, no matter the results; I’m just as happy being at home with them.”