Spinnerbaits in Fall with Jonathon VanDam

Because the fall of the year is such a prominent time for bass to be completely focused on chasing baitfish, a number of fishing tactics come into play. 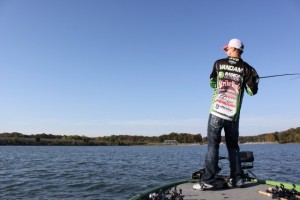 Some anglers love to throw topwater, some like jerkbaits, some swim jigs, others like one or another type of spoon, and one of the more prominent methods for catching bass is a crankbait. All of those can be downright devastating given that the conditions are right for them.

While any of those are tactics that an angler could rely on throughout the fall, for Bassmaster Elite Series Champion Jonathon VanDam, if he could only choose one lure, it would be a spinnerbait.

“I really like a spinnerbait any time I can throw it because it does such a good job of getting me that higher quality bite,” he said. “The conditions have to be right, but if I can get the type of conditions that I like, that’s the bait I will throw.”

Spinnerbait Conditions?
VanDam looks for a certain set of conditions to be prevalent if he is planning on picking up a spinnerbait. He prefers there to be some breakup of the sky and the surface of the water. “If there is some cloud cover in the sky, that’s one thing I look for,” he said. “I also want there to be at least a steady ripple on the surface of the water; those are optimal spinnerbait conditions.”

Along with the environmental conditions, VanDam said that there needs to be a certain type of baitfish presence in the area he is fishing. He is not talking about a certain species of baitfish, but rather the way they make their presence known. 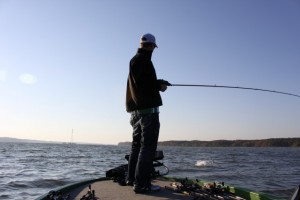 “I want to see little groups of baitfish in the shallows, and I want to be able to see some activity from them,” he said. “If the bait is in little groups and they are roaming the shallows or flipping on the surface, then a spinnerbait is going to be my first choice.”

Largemouth or Smallmouth?
VanDam said that he will choose a spinnerbait for either species given the right conditions, and that he looks for different things in different parts of the country.

For smallmouth in the northern part of the country – where he is from – VanDam begins his search on shallow flats in water from one to five feet deep. He said that he looks for specific types of cover on those flats. “I look for gravelly spots on the flat and I look for dark spots too,” he said. “When I find those, with baitfish running through the area, I find smallmouth that will eat a spinnerbait.”

For largemouth lakes throughout other parts of the country, he tends to look in two areas. He said that he often begins his search on secondary flats outside of major tributaries that are holding grass. His belief is that the grass helps hold the baitfish in the area and makes largemouth hold there as well.

If there are no grass covered flats outside, then he turns his attention to the backs of creeks where bass will corral bait on secondary points and in the small pockets off of the main creek. “If there is a breeze blowing back in there, it gets even better,” he said. “Those are the perfect places to look for fish that will chase a spinnerbait.” 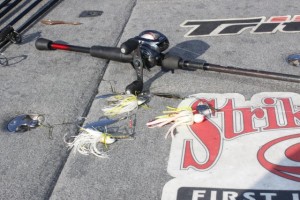 Blades and Blade Gear
VanDam prefers two spinnerbaits depending on the water clarity and species. If he is fishing for largemouth and the water is clear to stained, then he prefers a 1/2-ounce Strike King Tour Grade double willow spinnerbait in Sexy Shad color. If the water is stained to dirty, he use the same model, but switches to a tandem, Colorado/ Willowleaf blade model and goes with the Chartreuse Sexy Shad color.

For smallmouth applications, he prefers the 1/2-ounce double willow Tour Grade Painted Blade Spinnerbaits from Strike King in Sexy Shad or Sexy Blue Back Herring. “Remember, smallmouth are aggressive on painted blade spinnerbaits, and they really don’t bite well in dirty water,” he said. “So, I use those baits in clear water because they appeal to smallmouth in my waters.”

Retrieve
VanDam is an aggressive angler who prefers to keep the spinnerbiat up in the water column and moving fairly quickly most of the time. “I reel it quickly allowing the bait to scoot over the top of the fish,” he said. “The fish can’t get too good of a look at it while it’s going overhead and they have to react to it.” His only change would be in water that is heavily stained, and then he prefers to slow the bait down and keep it in front of the fish. 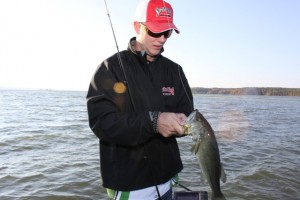 He said he prefers to stay with a steady retrieve that mixes in a twitch of the rod tip to make the blades jump a little. If fish are not really aggressive however, he does employ a pause and go retrieve to make fish respond a little more.

“Spinnerbaits are a great way to attract a little higher quality fish,” said VanDam. “Plus, other baits have become more popular nowadays, so the fish seem to eat them better; when the conditions are right.”