Jeremy Lawyer Leads Day One of 2016 BFL All American 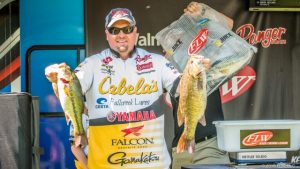 Hosted by Cadiz-Trigg County Tourism, the BFL All-American features the top 49 boaters and top 49 co-anglers from across the 24-division BFL circuit and the TBF National Championship casting for cash prizes of up to $120,000 in the Boater Division and $60,000 in the Co-angler Division, plus an opportunity to compete for the Forrest Wood Cup Aug. 4-7 on Wheeler Lake in Huntsville, Alabama.

“I really thought I was going to catch them out there in a couple of key areas, but it was a grind,” said Lawyer, who punched his ticket to the event via his fourth place finish at a BFL regional championship on Kentucky Lake last season. “We’re all rotating through a lot of different cover out there.”

Lawyer said he ran to nearly 50 different areas between the takeoff ramp and the Dover, Tennessee-region throughout the day, targeting fish that were setting up with the current.

“I had a limit by 10:30 a.m.,” said Lawyer. “Of the eight keepers I caught, two of the better ones came from back-to-back casts in an area that I stopped at on a whim. The rest came from different spots. It’s really going to be about timing this week. You’ve got to stop when there’s a fish there, you can’t sit in one place.”

“I’ve got 10 rods on my deck, each rigged different,” said Lawyer. “Sometimes I get tired of throwing the same thing. I’m not afraid to pick up something new, it helps my confidence.”

Lawyer said he plans to follow a similar route tomorrow, with some new areas mixed in.

“I’m going to make that same milk run,” said Lawyer. “I caught a couple up shallow today, so I’m probably going to try and do that again, too. I’m not going to play it safe, that’s for sure. I’m going to go out there swinging.”

The top 10 boaters after Day One on Lake Barkley are:

Complete results can be found at FLWFishing.com.

Anglers will take off from the Lake Barkley State Resort Park Marina located at 4200 State Park Road in Cadiz at 7 a.m. CDT each morning. Weigh-in will be held at the marina beginning at 3 p.m. Friday. Saturday’s final weigh-in will be held in conjunction with the FLW Tour weigh-in at Kentucky Dam Village State Park, located at 7792 U.S. Highway 641 N. in Gilbertsville, Kentucky, beginning at 5:30 p.m.

The BFL is a 24-division circuit devoted to weekend anglers, with 120 tournaments throughout the season, five in each division. The top 50 boaters and co-anglers from each division qualify for a regional tournament and are competing to finish in the top six, which then qualifies them for one of the longest-running championships in all of competitive bass fishing – the BFL All-American. Top winners in the BFL can move up to the Costa FLW Series or even the Walmart FLW Tour.

Coverage of the 2016 BFL All-American will premiere in high-definition (HD) on NBC Sports Network (NBCSN) Oct. 5 from 1 p.m.-2 p.m. EDT. The Emmy-nominated “FLW” television show airs on NBCSN, the Pursuit Channel and the World Fishing Network and is broadcast to more than 564 million households worldwide, making it the most widely distributed weekly outdoors-sports television show in the world.

For a full schedule of events, complete details and updated information visit FLWFishing.com. For regular updates, photos, tournament news and more, follow FLW on Facebook at Facebook.com/FLWFishing and on Twitter at Twitter.com/FLWFishing.