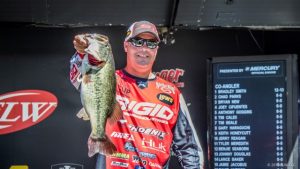 GILBERTSVILLE, Ky. (June 9, 2016) – After winning the Forrest Wood Cup last season, pro angler Brad Knight has been in a bit of a slump. In the four regular-season events held since, Knight has had an average finish of 79th place and cashed just one paycheck. This week at the Walmart FLW Tour at Kentucky Lake presented by Mercury Marine, Knight looks to be breaking out of that slump.

Knight, of Lancing, Tennessee, caught five largemouth that weighed 23 pounds, 6 ounces to take the lead on Day One, ahead of Yamamoto Baits pro Shinichi Fukae of Palestine, Texas, (23-3) in second place and third-place angler Randy Haynes of Counce, Tennessee, (22-15) in the four-day event that features 162 of the top bass-fishing anglers in the world competing for a top cash award of up to $125,000.

“I was covering a lot of water today; not fishing a bunch of big schools, but catching a few here and there,” said Knight, who has two previous top-10 finishes on Kentucky Lake in FLW competition. “I had around 20 stops that I fished and I caught 25 to 30 keepers, cranking with a Strike King plug, working as hard as I can.

“I caught the big one in the last two hours of the day,” Knight said. “I hate to call it luck, so I’ll call it good fortune from working hard.”

Knight was in the first flight of boats to check in Thursday, and was hopeful that his long day of fishing when the flights flip on Friday would be similar.

“The places that have 40 to 50 bass on them will have five boats already on them, and that’s what I’m trying to avoid,” Knight said. “I hope I can go out there tomorrow and catch a quick limit and relax. I don’t really know when the bites are going to come, you just have to hope at the end of the day you’ll have five good ones.”

With upper-90-degree temperatures being forecast over the next few days, Knight is looking forward to the heat.

“When I’ve got sweat running down my back, dripping off of my elbows and my arms are hurting because I’m winding a plug as hard as I can go, I’m happy,” Knight said. ”This is the Tennessee River and I grew up fishing here. I’m pretty comfortable here.”

The top 10 pros after Day One on Kentucky Lake are:

Knight also weighed in an 8-pound, 9-ounce largemouth to win the Big Bass Award on the pro side Thursday and the $500 prize.

The top 10 co-anglers after Day One on Kentucky Lake are:

Horton also earned the Big Bass Award on the co-angler side Thursday with a bass weighing 7 pounds, 10 ounces to win the $250 prize.

Fans will be treated to the FLW Expo Saturday and Sunday from noon to 4 p.m. at Kentucky Dam State Park before the final weigh-ins. The Expo includes a 100-yard Lew’s Casting Lane, the opportunity to interact with professional anglers, enjoy interactive games, activities and giveaways provided by FLW sponsors, and learn more about the sport of fishing and other outdoor activities. All activities are free and open to the public.

Also for youth, the FLW Foundation’s Unified Fishing Derby will be held at Kentucky Dam State Park Saturday, June 11, from 9:30-11:30 a.m. The event is hosted by FLW Foundation pro Cody Kelley along with other FLW Tour anglers, and is free and open to area youth 18 years of age and younger and Special Olympics athletes. Event goodie bags will be awarded to the first 50 participants who sign up. Rods and reels are available for use, but youth are encouraged to bring their own if they own one. All bait is donated by the DMF Bait Company.

Coverage of the Kentucky Lake tournament will premiere in high-definition (HD) on NBC Sports Network (NBCSN) Sept. 28 from 1 p.m.-2 p.m. EST. The Emmy-nominated “FLW” television show airs on NBCSN, the Pursuit Channel and the World Fishing Network and is broadcast to more than 564 million households worldwide, making it the most widely distributed weekly outdoors-sports television show in the world.

The Walmart FLW Tour at Pickwick Lake presented by Mercury Marine is hosted by the Kentucky Lake Convention and Visitor’s Bureau.