Roll Tide versus War Eagle, redneck pride and hillbillies. Alabama is known for a lot of different things, but let me tell you, there are parts of Alabaman’s that are rarely seen in public, and that is by design. 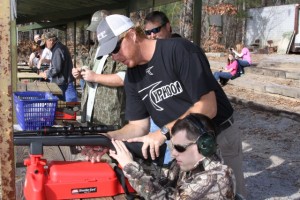 The biggest part of that is defined by their heart, and I got to experience that this past weekend while I was in Alexander City for an event of a group called Outdoor Friends Forever – OFF.

Outdoor Friends Forever is a group established by local angler Jim Hardy, William Davis, of Davis Bait Company and Local businessman Mel Palmer. Of course, there are many people involved that make OFF what it is. Wives and friends, brothers and sisters, landowners and volunteers. All of them come together for a common cause – to allow children with special needs a chance to experience the outdoors, in a very real way.

Without taking the focus away from the participants; which is the desire of everyone involved. Hardy, a lifelong outdoorsman experienced a life changing event in 2001 when the tree stand he was hunting from collapsed and the fall resulted in him being paralyzed from the waist down.

With the indomitable spirit that I have come to know in him since meeting him in 2009 at the NetBait booth at ICAST, Hardy set about life in the same way, even with his new situation in consideration. He is the kind of person, who refuses to get a handicapped license plate for his truck, despite the fact that he has to move with a wheel chair. Hardy’s determination is such, that he fishes local bass tournaments, Bassmaster Weekend Series and has even fished Bassmaster Opens as a boater.

Davis and Palmer began helping Hardy with local Easter Seals events several years ago, but there were limitations with how much they could allow the children to do, and it wasn’t free to the families. Out of their experiences, OFF was formed to allow kids to enjoy hunting and fishing in the outdoors. 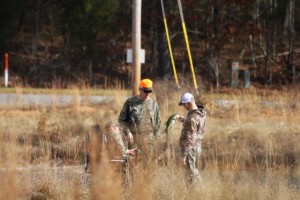 The organization hosts deer hunts two times a year, and fishing events in between. This past weekend was one of those hunts. The group brought eight hunters, their families and a host of volunteers together to a lodge outside Alexander City, Ala. Altogether, more than a hundred people were at the event.

The whole goal of the weekend outing was to share the love of the outdoors with a group of children that a lot of people in the world deem unable to participate in activities like this. Outdoor Friends Forever brought the people together and the resources to make sure all was safe and enjoyable. The event included gun safety training, firing range practice, and medical personnel on site to make sure everyone’s needs were taken care of.

The guides who volunteered for the hunt received special instruction from the medical personnel on being prepared for the special needs of some of the hunters. With the group including youngsters in wheelchairs, with Down’s Syndrome, Multiple Sclerosis, Cerebral Palsy, blindness and others, the organization made sure that the guides were prepared for their special needs.

The event included four “celebrity guides” who volunteered their time to the outing. Those were current Elite Series pros Greg Vinson, Bill Lowen and Bradley Roy and future Elite Series rookie Kelly Jaye. They took their newfound friends to the range, helped them to use and learn about the firearms, get into their blinds and in some cases fire on deer.

On Sunday, the group spent a couple of hours fishing in the ponds on the land, and the professional anglers got to do a little bit of instruction in their own field. By the time the second day of the hunt was over, two hunters managed to bag nice does and several bass were caught during the fishing outing. 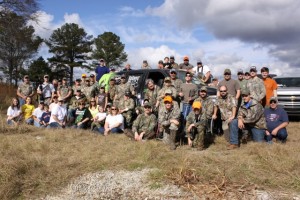 With all of the success over the weekend, the real success was the fact that people got to share not only the experience of activities that they love, but they also got to share parts of themselves. In sharing themselves, they introduce new people to the sport, but more importantly share their hearts with another person.

The most remarkable thing about events such as this is seeing the reactions from the different people involved. The excitement from the campers who catch their first bass or shoot their first deep is infectious. Their reactions are priceless as they recount the tales of their conquest and show off their prized trophies. The smiles on their faces showing the joy that is pouring from inside them.

But, even more touching is the response from the guides. Watching grown men get choked up as they share the excitement of the hunt or the catch may be the most touching part about the whole experience. Being around professional anglers, I see them get emotional when they accomplish a goal, win a tournament, earn a big title or fall short.

However, this release of emotion is a completely different thing. This is the emotion of a parent, a brother or a friend being proud of a loved one. These people become emotionally tied to their hunting partners for the weekend that they can’t help but become invested in the process. 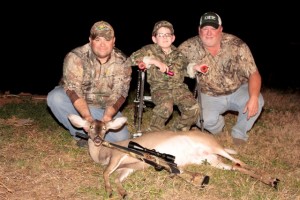 The results speak for themselves, and they are reflected in the name of the organization. Through these events and the shared experiences, they have all truly become friends, in fact, Outdoor Friends Forever.

For more information, visit them on the web at www.outdoorfriendsforever.org.