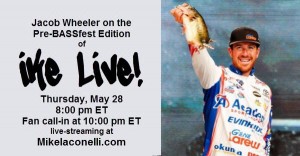 Pittsgrove, NJ, May 20, 2015 – Jacob Wheeler, winner of the 2014 BASSfest, joins Mike Iaconelli to discuss the upcoming Bassfest on the Pre-BASSfest Edition of Ike Live!, Thursday, May 28 at 8:00 pm ET, live-streaming from MikeIaconelli.com.

One lucky fan will win a Fishidy subscription. During the show, Ike will announce a picture theme, and the fan uploading the best picture illustrating the theme wins the subscription. In addition, fans can call or tweet their fishing questions during the “after-show,” broadcast from 10:00 to 11:00 pm ET, and he and co-host Pete Gluszek will respond, live, with their fishing tips and experiences.

The live show will be archived on MikeIaconelli.com/Ike Live the next day, for viewing or downloading. Audio of the show will be available on iTunes and as an iTunes subscription. Go to iTunes (or TinyURL.com/IkeLiveiTunes) and click “View in iTunes.” Choose iTunes as your application. Click “Subscribe” and new shows appear in your iTunes library automatically as they become available.

Ike Live! fans receive email reminders for the show when they join the Ike’s Fish Heads Nation at MikeIaconelli.com , and they can opt to receive the monthly newsletter, links to videos and periodic discount offers. Clips of the show are available on YouTube at Going Ike and via YouTube subscription.

A South Philadelphia native now living in South Jersey, Mike Iaconelli fell in love with fishing at his grandfather’s side in the Pocono Mountains of Pennsylvania. He began fishing in tournaments after high school, joined the pro-am circuit in 1992 and turned pro in 2000. In 2003, he won the Bassmaster Classic. He is the only angler to win the Bassmaster Classic, Bassmaster Angler of the Year and B.A.S.S. Nation Championship.

He and wife Becky run The Ike Foundation, which provides fishing equipment to youth fishing clubs to “get kids fishing.” In addition, he and fellow fishing champ Pete Gluszek run The Bass University, which offers intense 2-day fishing classes that bring avid amateurs and professional fishermen together.