With Oklahoma’s Lake Wister severely flooded but falling quickly, Harry Padgett was confident that the fish would be up a certain creek and relating to flooded wood or the briar patches common around the shorelines. With the water falling, he figured the fish might be on the outside edge of the flooded timber and pastures instead of buried into the middle of the thick stuff. 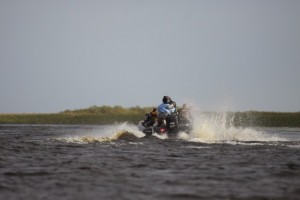 We caught a bundle of stout largemouths in short order, making things seem almost too easy. For me, it was easy, because Padgett did most of the thinking. All I had to do was throw my spinnerbait around the stuff he said they would be using.

In many rivers and lakes, the task of locating fish in thousands of acres of water is daunting. It often seems like the fish could be anywhere. Too often, anglers allow the big-picture view to overwhelm them and they simply start fishing, picking a bank at random and casting to everything that looks like it could hold a fish. Occasionally that works; usually, it does not.

Padgett, an Arkansas tournament angler, takes a much more systematic approach that begins with looking at things from the bass’ perspective. Always taking into account the type of water he is fishing and what he has learned about fish in his own part of the country, he considers the five factors that he has found to have the greatest impact on a bass’ locations and behavior: season, water, temperature, water color, water level and weather.

SEASON
Season provides answers to many big-picture questions that help you know where to begin searching for fish. Are stages of the spawn a factor? Should the fish be on mid-summer structure? Are they apt to be following baitfish up creeks? Not all fish in a lake do the same things at the same time, but thinking about the season helps you narrow thoughts about where most fish should be.
Season, more so than other controlling factors, must be tied with geography. Fish finish spawning in Florida while Minnesota lakes remain frozen. Pay attention to when things happen on the bodies of water closest to you, and that will give you the first piece of the puzzle.

WATER TEMPERATURE
Narrowing the focus a little more, the water temperature reveals more about how the fish will behave and about where they will be. Anglers too often ignore the temperature readings shown on their electronics. 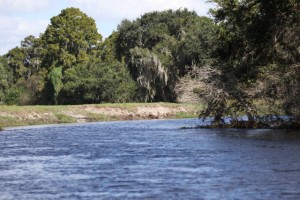 Exactly how the temperature comes into play depends upon the season. During the summer, you’re often looking for those areas that are a couple of degrees cooler than the rest of the lake. During winter, the opposite is true. Through spring and fall, temperatures help you know how far along fish are likely to be either in spawning phases or in transitional moves.

The water temperature, which can change as a day progresses, also affects the activity level of the fish. When the water is somewhat cool late in the fall, for example, the fish often will become more active and may move shallower as the day progresses and the water warms.

WATER COLOR
The water was heavily stained where Padgett and I fished. That’s the common condition at Wister, especially in the spring, and it influences the normal behavior of the fish. Generally speaking, dirtier water causes fish to stay shallow, hold tight to cover and rely heavily on their lateral lines for finding meals. In clear water, the fish are more apt to use offshore structure or cruise flats and to feed visually.

Also take note of how water clarity varies within a body of water. If a lake was badly muddied by a big rain but the backs of its creeks have begun to clear, there’s a good chance that feeding fish will be concentrated in the clear water.

Understanding the influence of water color helps you pick potentially productive areas and to choose the best lures to use. It also impacts color selections. Padgett’s picks range from darker colors that are easy for fish to see for dirty water to translucent colors for very clear water.

WATER LEVEL
Some waterways are subject to massive level fluctuations, while others only vary slightly. Most go up and down some, though, and the fish tend to move up and down with the water. High water generally pushes fish toward the banks, especially when new cover gets flooded. Low water draws fish out toward creek and river channels.

In most rivers and many reservoirs, high water has the added effect of creating current, which helps position the fish because they either move into pockets that are fully protected from the flow or they hold in predictable positions behind trees, dock supports or other current-breaking pieces of cover.

As with other variables discussed, the trend is at least as important as the current conditions. In other words, as you look at the level and consider how the fish will react, also take into account whether the water is rising or falling (or neither) and how the trend will impact the fish’s positioning.

WEATHER
The weather is a “constant variable,” according to Padgett, and the bass gave evidence to that as we fished together. The morning began bright, and while the sun continued shining the fish bit well. When thick clouds settled in a few hours into the trip, the bite slowed dramatically and the fish repositioned themselves.
Rising and falling pressure, rain, clouds, sunshine, steady wind… many weather conditions dictate where the fish are likely to be, so watch for clues. Pay especially close attention to any condition that changes during the day and note how that change affects the fish. 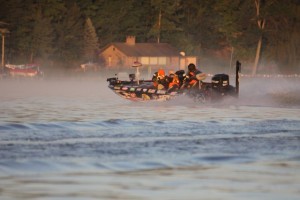 BRINGING IT TOGETHER
To cover all variables involved would require “a very large volume,” according to Padgett, and there’s no simple, specific formula that leads to the fish every time. That said, giving fair and intentional consideration to these factors and taking into account acquired knowledge about the waters you are fishing can be a major step toward putting fish in the boat.

Of course, Padgett doesn’t assume anything, but lets the fish provide the final answers each day.
“I’m still trying and learning,” he said, “because, after all, the fish make the rules and can change their rules when and where they choose.”