The crankbait is one of the most important tools in bass fishing, but they’re a lot like screwdrivers – you need the right style to get the job done. 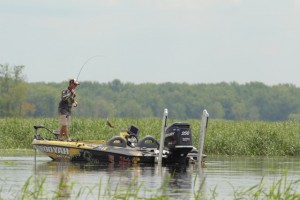 Most bass fishermen know that crankbaits rank among the most productive and user-friendly lures in existence. Various cranks look mighty similar in tackle trays, though, so picking the best lure to use can get confusing. Retrieve is another variable that defines whether you get the job done. B.A.S.S. pro Terry Butcher has depended on crankbaits for many of his wins, and has an advanced approach to selecting and fishing crankbaits.

A two-time B.A.S.S. winner who calls Oklahoma home, Butcher spends a lot of time with a crankbait tied to his line. He cranks through the seasons and in a big range of situations.

“I try to learn something about a lake and its tendencies for the time of year when I’ll be fishing,” Butcher said. “Generalities about the lake and the time of year, when combined with specific observations about conditions, tell me a lot about the kinds of areas I will fish, and consequently, the best crankbait to choose.”

The biggest factor that plays into Butcher’s crankbait-selection decision is the depth of the water or the cover the fish are using. Generally speaking, he has favorite crankbaits for various depth ranges. That said, the ranges overlap, and at times he might choose a particular crankbait because of its wobble or a lure that runs too deep for the range because he really wants grind the bottom.

“Sometime I might have three different crankbaits tied on and be switching from one to the next to fish the same bank,” Butcher said.

For super-shallow water he likes the XCalibur Square Lip Xcs. It comes into play any time bass are in less than a couple of feet of water and using cover near the bank, but Butcher might choose it for water as deep as 4 feet if he expects the fish to be active. He uses a Square Lip the most from late spring through early fall when the water is warmer and active fish like a hard-kicking lure. 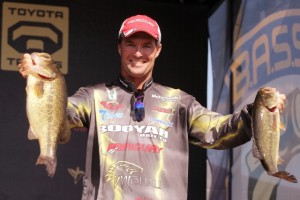 To get just a little deeper, down to about 6 feet, Butcher will opt for the legendary Bomber 4A. He’ll sometimes use a 4A to fish in only a couple feet of water when he expects fish to be shallow but want a little tighter wiggle. He says he’s found that bass like that action early and late in the year. During the middle of the winter if the water is really cold, Butcher might choose a Bomber Flat A, which has a super-tight wiggle and a narrow profile to imitate winter-slowed shad in shallow water.

For water that’s more than about 6 feet, Butcher’s bait of choice is No. 6 Fat Free Shad, which is one size smaller than the original Fat Free Shad and doesn’t dig quite as deep. That bait covers his needs down to around 12 feet and is normally his first choice for medium depths. A Bomber Model 6A also comes into play for the same depth range and allows him to offer a little different profile and wobble. It’s just one of those things that he has to let the fish tell him what they want on that day, he says.

For deep cranking, which encompasses most offshore applications and can be a factor any month of the year for Butcher, his go-to crankbait is always a full-sized Bomber Fat Free Shad.

Presentations Are As Important As The Lure

Butcher absolutely loves throwing a crankbait in shallow water, and he starts off fishing with an aggressive attitude. He fishes it fast and smashes it into as much wood, rock or other cover as he can.

“That’s what’s going on in shallow water,” Butcher said. “The shad are racing around trying to get away from the bass, so I want that bait up there hitting and deflecting off things. Same thing with the crawfish. If you ever see them up around the shallow rocks, they move around pretty erratically.”

For deeper presentations, Butcher believes in allowing the fish to dictate how they want the bait. In most cases he’s hitting the bottom or some type of cover at least some of the time. However, sometimes he wants his bait to barely tick the structure while other times he wants a crankbait really grinding and kicking up sediment. Retrieve speed varies a lot, as does the frequency (or existence) of pauses or rod tip sweeps.

“Some days you just have to reel steadily. Other days, whenever you hit something, you have to pause and let the bait float up a bit,” Butcher said. “I’ll experiment a lot and adjust based on what the fish show me.”

Butcher has enjoyed tremendous success with a standard rattling Fat Free Shad BD7, so that remains his primary bait for deep cranking. It’s his deep-diver of choice when he’s searching for fish and his normal first pick when pulls up on a spot. Once he has worked a ledge or hump thoroughly, though, and has pulled what fish he thinks he can from it, he often picks up a rod rigged with a silent version of the same crankbait.

“Sometimes you’ll catch another fish or two from a spot just by making that change,” he says. “The one with the rattles is my first choice, but there seem to be some fish that prefer the silent one.”

Another adjustment Butcher commonly makes before abandoning a spot is to work the same structure from the opposite side.

“If I started out positioned just off a ledge and worked my crankbait down it, I’ll move to the shallow side and try working up it. It’s a presentation fish don’t see a lot.”

Still another way Butcher varies his crankbait approach is by keeping the same model and color of crankbait tied to more than one rod, but each is spooled with a different line weight. Any given crankbait fished on lighter line runs deeper, so trying a couple of combinations over a structure or along a stretch of bank helps him zero-in on just the right amount of bottom contact for triggering strikes any given day. 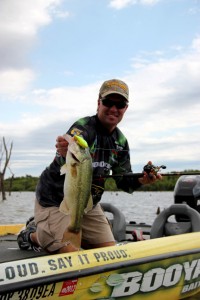