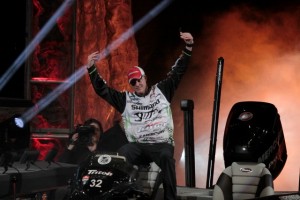 This is a time of transition for bass anglers.  Bass finish their spawning and recovery and begin to roam about looking to feed in order to keep up with the higher metabolic ratesof the warm season.  This means that bass will often be agressive and ready to chase down a meal.

Smart anglers will begin to pick up some power presentations and make the bass react.

One of those anglers is Strike King Lure Company pro Jonathon VanDam, the Elite Series winner from Kalamazoo, Mich.  VanDam, as the name suggests, is a power fisherman, preferring to move through the water quickly, trying to cover as much water as he can in an effort to put his lure in front of as many active bass as possible.

He has long been a fan of crankbaits, and right now he’s particularly fond of shallow running cranks that allow him to comb the shallow flats and secondary points that bass stack up on.  “Shallow Bass will school up on secondary points and wait for the baitfish to come by, then feed in spurts,” he said.  “Some of those flurries may only last a few minutes, or they could be as long as a half an hour, and it is key to get the timing right in order to capitalize.”

His lure of choice had historically been all over the board, but when Strike King released the new KVD 1.5 and 2.5 squarebill crankbaits, he had found his favorite.  “The action of the lure and the speed of retrieve are very important for triggering strikes,” he said.  “The KVD 1.5 and 2.5 cranks have tight wiggles, but they all hunt on their tracks, and I can fish them very quickly.” 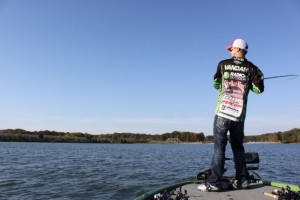 The “hunting” action VanDam mentioned refers to the fact that the bait sort of wanders off center of its retrieve before returning the middle; it does so in both directions, giving a random appeal to bass.  Because of the work of Strike King’s designers, the bait has the right action, and is very stable on a high speed retrieve.

“There are times that you don’t hit the timing exactly right when you’re moving through creek channels looking for active fish,” said VanDam.  “That is why I use a fairly fast retrieve; I’m trying to trigger strikes from fish that are waiting to ambush baitfish that move by.”

Type of Cover
VanDam said that he waits for the bass to begin moving to the main lake as the final spawners move.  As they head towards main lake points, they begin to stage on secondary points that are typically shallower and flatter that the main point of the tributary.  On hard bottom lakes, he looks for gravel bottoms to hold bass, but on soft bottoms, he changes his focus.

I still look for ambush points around the creeks on soft bottom lakes, but I look to target grass edges primarily,” he said.  “Grass edges give the bass something to hide in, and it also holds the heat a little bit, making the temperature transition a little smoother.”

In approaching his targets, he looks for angles that give him the best chance to deflect his bait off of something to give him an erratic change in the retrieve.  “I make casts across the point and try to bang the bait off of rocks and stickups on hard bottoms,” he said.  “On grassy lakes, I will make casts that are parallel to the cover, as well as the quarter the edges, anything to surprise a bass and draw a reaction strike.” 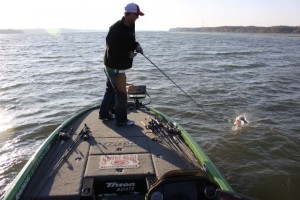 Equipment
When thinking of the kind of strikes that can be generated by bass swiping at a fast moving lure, violence comes to mind.  Bass usually ambush the lure and turn sharply with it in their mouths, literally stopping the lure in its tracks.  VanDam compensates for this aggressive nature and battle ahead by using a specially designed crankbait rod with a soft tip and parabolic bend.

“I throw these baits on a 7’1” GLoomis GLX 855 crankbait rod,” he said. “It has the right action for making a lot of casts quickly, loads well on the strike, and handles the surges of big fish on a crankbait.”  VanDam pairs his rod with a 6.5:1 retrieve speed Shimano Chronarch, which combines speed for the retrieve and the power to control hot fish.

He fills his spool with 12 to 14-pound test fluorocarbon or 30-pound-test Power Pro Super Slick braided line depending on water clarity.  “If the water is clear I use fluorocarbon, but if there is decent color to the water, I use braid,” he explained.  “The low stretch of the line is for snapping the bait free from grass, and the least amount of stretch I have the better it is for that.”

He said he has also begun changing out his stock treble hooks in favor of Lazer TroKar TK310 Wide Gap trebles for faster penetration on the hookset. 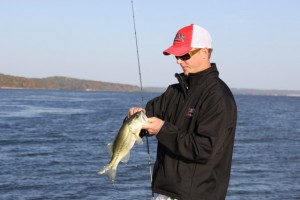 Choosing a Lure
The Strike King KVD squarebills come in three sizes, the 1.0, 1.5 and the larger 2.5 version, and choosing which to throw is a decision VanDam makes with two factors; water depth and prevalent baitfish. “I use the 1.5 when I am fishing shallow and turn to the 2.5 when I am fishing outside, because it runs a little deeper,” he said.  “Unless I am on a body of water that has larger baitfish, then I use the 2.5 because I am trying to match the size of their food source.”

On the topic of matching the hatch, VanDam also looks at the body of water and what the bass are feeding on when choosing a color.  “I usually throw Sexy Shad anytime I am trying to mimic shad, and the water is lightly stained to just this side of dirty,” he said.  “If the water is really clear, then I use Green Gizzard Shad, and I try to use bluegill if there are a lot of panfish around.”

“These new baits have really become one of my go to lures for much of the year, from the postspawn through the fall,” said VanDam.  “These have taken the squarebill to a whole new level.”