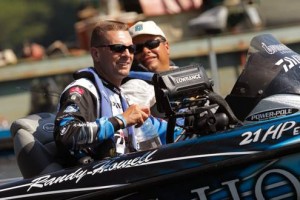 During practice for the Bassmaster Event on the Sabine River Randy Howell improved his fuel economy by 13%. During a 60 mile run with Brent Chapman who also runs a 2013 Triton 21hp, Howell saw considerable fuel economy improvements over Chapman. Both were running the same prop, same engine with full fuel tanks, and had similar gear and weight in the boats. After re-fueling, Randy had used 34.5 gal of fuel on the 120 mile round trip run while Brent had used 40 gal of fuel. That’s a 13% difference! And it’s all because of the HullSpeed Performance Marine Coating that Randy Howell runs on the bottom of his boat.

When Howell’s boat was first painted with HullSpeed early this year he immediately noticed faster acceleration and hole shot as well as +1-2 mph increase in top speed. The slick yet durable coating also improves launching and loading off the trailer, the ability to slide over logs and cover easier allowing you to get in & out of more places, maneuverability in tight channels, and improved hull cleaning/reduced maintenance which helps reduce the adhesion and transfer of aquatic invasive species. Other pro’s using HullSpeed coatings include Mike Iaconelli, Pete Ponds, Chad Pipkens, RC Cooper & Josh Wich. For more information on HullSpeed Coatings or to place an order, please visit www.hullspeed.us. To see Randy Howell’s video testimonial follow the YouTube link below or check out Randy’s or HullSpeed’s facebook page. GO FASTER, GO CLEANER, FISH LONGER. HullSpeed Performance Marine Coatings.