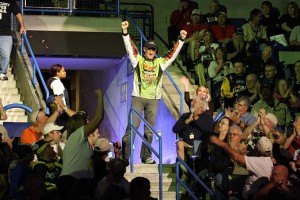 Brent Chapman from Lake Quivira, Kansas was the lone finisher in the top five to not fish his tournament days in Lake Cataouatche. Chapman related that as early as October, he had decided to focus his efforts on the Venice area betting on the larger populations of fish. By doing so he committed to the long runs that spending your day in Venice would require.

“I did plenty of research before the December pre-practice period and I talked to friend in the area that was familiar with the Louisiana Delta,” said Chapman. “Knowing that the Mississippi River water was likely to be cold I committed to making the run to Venice because it gave me the most consistent area to generate bites.  I knew that there were potential area for getting bigger bites but I felt that consistency was going to be more important in this tournament. 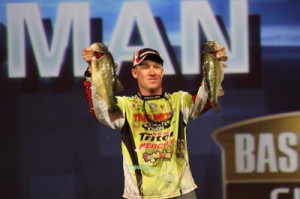 The pre-practice period proved to be exactly what he had envisioned and he was greeted with the colder water that he had anticipated.

Despite that cooler water he was able to generate bites.
When he arrived in the area for the three day practice period prior to the tournament, Chapman set up shop in Venice and stayed there for the entire three day practice. He spent the first two days fine tuning his areas and found two stretches that he would focus on throughout the tournament.  “My plan A area was one that I felt would give me the best chance to win, but I also found a second area that I felt I could get a quality limit from,” Chapman said. “With those two areas I felt like I had the potential to have a really good tournament, and if all went right, I felt like I had a chance to win.”

Chapman started with conventional lures that he would use for springtime fishing, big jigs with four-inch Tightlines UV Tackle UV Beavers and other larger profile lures, but failed to generate numbers of strikes. “I thought I should be getting more bites so I downsized my lure to the three-inch UV Beaver,” he said. “I know the UV technology was helping bass to see the lure but I was amazed at the quality of bites I was getting on the smaller creature bait.”

With his two areas being decided he spent his final day trying to locate the best route. So, he had his father put him in the water at Venice so he could make the run back to Bayou Segnette State Park; the official tournament take off. His plan for the day was to test the route across the Gulf of Mexico and also to time the run and find out how much fuel he would burn on the way back in his Mercury Pro XS 250. 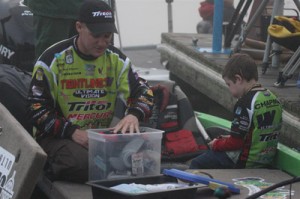 He poked around in the area closer to the launch ramp for the rest of the day and finally eliminated that from his thoughts as his primary area. “I fished many of the areas including some of Cataouatche and didn’t get enough bites to make me want to go there,” he said. “I even fished around locals and didn’t see anyone set the hook, catch any fish, so I was even more confident in my plan at that point.”

His father picked him up at Bayou Segnette and he and his family checked in to the host hotel and got ready for the festivities to begin.

Official Practice
On their final official practice day Chapman decided again to run the route to Venice. His intent was to find another potential run that would not allow him to run through the Gulf of Mexico; in case of winds.  “I ran straight there, timed it, refueled and ran straight back,” said Chapman. “ When I got back I fished a little bit and found a plan C area just in case much of the day was cancelled due to fog delay. I was hoping I wouldn’t need this area though.”

Tournament Day One
As expected, warmer air temperatures created a heavy fog and resulted in a delay of more than an hour. B.A.S.S. officials waited for the fog to lift before sending the anglers out, which really affected the amount of fishing time Chapman would have. “I knew that I was going to have less time to fish than I had planned, so I focused on high percentage areas,” he said.  What he targeted were the steeper sides of the banks in the narrow canals. “This was also a necessity because the wind had started blowing and in doing so it pushed an extra foot of water out of those canals.” 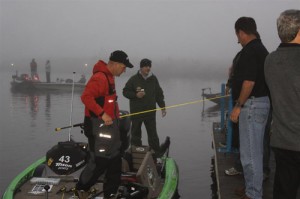 Chapman worked quickly targeting deeper water beneath dead roseau cane canopies and matted hyacinth; anything that had created some sort of overhead cover for bass to get under. “I was a little rushed knowing I only had a little time because of the delay,” said chapman. “But working quickly I was able to put together a little bit more precise idea of where  the fish were positioned which would help me the next day.” Chapman would weigh 18 pounds and end the day in fourth place.

Tournament Day Two
The fog rolled in thicker overnight and tournament officials waited for the fog to lift which resulted in an even longer delay than the first day. The nearly three hour wait did not dissuade Chapman’s desire to run to Venice. Knowing he might not even have an hour to fish, he still believed Venice gave him the best possible scenario to win the tournament.

He returned to his area with new understanding on how the fish were positioned.   Even though the warm air temperatures had caused a fog delay, it actually warmed the water into the low 50’s and helped the fishing.  “Because I had found the areas they were living in, I was able to even more quickly than the day before get to the high percentage spots,” Chapman revealed . “The fish had become more aggressive because of the warmer water and I was able to quickly pitch the bait in and get immediate response.”  Chapman increased his weight to more than 20 pounds, 1-ounce; which moved him into second place heading into the final round. 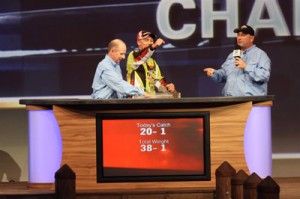 Tournament Day 3
On the final morning, the field was greeted with clear skies and only a half an hour fog delay which Chapman was prepared for. Overnight, service crews had installed the Lowrance Broadband Radar system that Chapman had borrowed from Terry Butcher; who had failed to make the top 25. “For a while there I didn’t think I was going to need the radar and had almost shut it off,” Chapman said. “But when I got near Venice I got into some river fog, the radar helped me get to my water.  I was really impressed with how the radar showed me any obstructions on the water, and it made it easier for me to navigate the fog.”

When he reached his canal Chapman found the water temperature had dropped nearly ten degrees, which resulted in less than active fish.  He started two hundred yards further down his canal because he had more time.  Even with the colder water temperatures, he started getting bites quickly. However, the fish he was catching were smaller; he believes the cold temperatures changed the area. “I’m not quite sure were the big fish went but I do know they didn’t bite,” said Chapman.  “Having a little more time to fish I even tried spinnerbaits and crankbaits around deeper milfoil but was not able to improve my weight.”

His final day’s weight of 16 pounds, 7 ounces was his lightest of the event, but upped his total to 54 pounds, 8 ounces; good enough for fifth place. However much he wanted to win, Chapman was not disappointed entirely. “I fished a really clean tournament, everything that bit I landed and it’s hard to be upset when you fish that flawlessly in a championship,” Chapman expressed.  “I thought that Venice would be the place, I couldn’t have predicted that the three best days of the last two weeks would have come which made Lake Cataouatche come on like it did; I am really satsified with the finish.”

Overall Chapman ran nearly 700 miles in the three day tournament and nearly 1000 when you factor in this practice day trial runs. 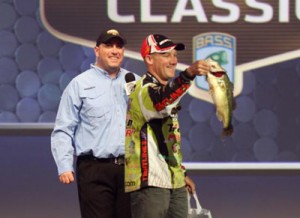 Equipment
Chapman fished days one and two with only two rods on the deck of his Triton. Both of them were flipping sticks. His rod of choice was the 7’6” inch Wright & McGill Co. Skeet Reese Micro Honeycomb Heavy Cover rod. He chose a Wright & McGill Co. Victory reel, which he spooled with 25-pound-test Gamma fluorocarbon. He used a Tightlines UV tackle three-inch UV Beaver in UV Blue color which he rigged on a 4/0 TroKar TK130 Flippin’ hook and an Eagle Claw 3/8-ounce Tungsten weight.  The reason he choose fluorocarbon instead of braided line was because the cover was loose enough that he did not feel he needed the braided line.