In the darkness of 5:30 this morning, Kevin VanDam stood under a floodlight, dressed in rain pants, pitching pieces of breakfast muffin to carp at Bull Shoals Marina. “They ain’t biting, dude – something’s bad wrong,” said the 7-time Toyota Tundra Bassmaster Angler of the Year.

The guy that knows more about how fish think than carp do, had extremely nasty approaching weather on his mind. “We’re fixing to get hammered,” said VanDam while pulling three Quantum spinning rod and reel combos out of his rod locker just prior to his breakfast meeting with the bugle mouthed bread suckers.

“I’ve been looking at three different weather websites on my iPad all morning, it’s going to get really bad,” warned VanDam.

Just down the dock from KVD and the carp was veteran Gary Klein recalling one of the worst weather events of his 34 years as a full time pro. “I was practicing for a U.S. Open on Lake Mead in the mid 80s, when I looked back across Virgin Basin, and stood face-to-face with a solid black squall line and white caps,” said Klein.

“I headed for the marina, tied up my Ranger 350 facing into the waves, ran up the hill to the marina restaurant for cover, and stood looking out through huge windows, that were later blown out, as the winds destroyed huge cigarette style boats and the docks below us,” added the Weatherford, Texas pro. 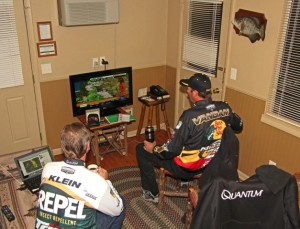 “Finally, when the squall line passed, Greg Hines and I ran down and cut my boat free from the tie lines with a knife,” continued Klein. “I raced it around to a cove I thought was safe, and six foot tall waves then proceeded to push it 12-feet up onto dry land. The storm punched a hole in the rear corner of that boat, but it still floated, and I competed out of that old Ranger in the tournament.”