I just got back from the Forrest Wood Cup at Lake Ouachita in Arkansas.

I went there for a day to work for Stratos in their booth at the FLW Outdoors Expo for a day. I flew into Little Rock on Friday and met Scott Arms from Ranger and Stratos and rode with him up to Hot Springs to be ready for the show on Saturday morning.

It turned out to be really cool, because I knew about half the people I saw there. It was good to see old friends that I know from the industry, and anglers that I used to compete against as well. It just goes to show that this is really a small industry, and weâ€™re all inter-related in one way or another in the business 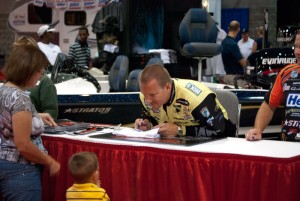 It was fun to be there for several reasons, first, I love the fans, and I got to spend eight hours signing autographs at the FLW Outdoors Expo in the Stratos booth. It was a line that never seemed to end, and I really enjoy doing that.

I got to spend some good quality time with the folks at Stratos and we talked about new product ideas and about boat performance. Iâ€™m not sure how they could improve on the Elite 210; because itâ€™s the best boat Iâ€™ve ever been in, but they certainly keep trying to make all of their products even better.

It was also fun because Iâ€™d never been to an FLW Tour event before. I got to go backstage and see how they do things and greet the guys as they waited to weigh in. I knew several of the anglers there, and was pulling for them to do well; but in the end, my TroKar hooks teammate Scott Martin proved to be too tough to beat on Lake Ouachita. He blew the field away by a little over five pounds, and if he wouldnâ€™t have stumbled slightly on day two, would have won by more than 10 pounds.

I know the folks in Denver at Wright & McGill Co / TroKar were probably doing a victory dance when Scott won; thatâ€™s a big deal for him and all of his sponsors; a big congratulations to Scott; thatâ€™s really cool.

I flew home that night and picked up my truck at the airport to make the hour long drive home. I was just about home when my truck was hit by something and it scared the crap out of me. Turned out that some kids decided it would be funny to egg some of the passing cars, and at 1:00 in the morning, I was out in front of my house washing egg off of the truck.

While I was washing the truck, I heard another car screech to a stop and I thought he crashed, but then I heard him yelling at the kids and then I heard the kids screaming and running away. I hope he found them and taught them a lesson.

Anyway; itâ€™s the last week of summer before the girls head back to school. So, weâ€™re going to take the chance to go camping one last time this week; and weâ€™re looking forward to that.

After that, Iâ€™ll be heading to Florida to film a Goliath Grouper and Hammerhead Shark show with Dave Mercer for his Facts of Fishing show, and then Iâ€™m off to Spirit Lake to work with Berkley on some new Havoc projects.

The work is never done.