There are many important tools in fishing.  Rods, reels, lures, hooks sinkers, fishfinders, baitfish activators, Power Poles, boats, motors, trolling motors; that squash between our ears that we call a brain.  However, as important as all of those are, if one component of our fishing system fails, we can have no success at all.

That component is fishing line.

Quite literally, the only connection – or life line – to intend a pun, is our fishing line.  The success of our efforts, planning and execution can be completely undone by the choice of poor quality fishing line, or even worse, poor line management technique.

Like so much of what we do here at Advanced Angler, we went to the people who can teach us the most with their experience to be better with line care, as well as how to make the appropriate choices with the types of lines we fish with.  We went to the pros.

Skeet Reese Stores his Berkley Lines in a Cooler, then fills his spools with Fresh Line Before Each Event

With the FLW Tour pros on the water this week, we went to three Elite Series pros to find out how they select lines, what their percentage of line type usage is, their management methods and other tips that they may have for optimal line management.

Those anglers are Skeet Reese, Gerald Swindle and Mark Menendez.

Skeet Reese
We asked Reese what his percentage of line use by type was, and his answer was the most simple of our three panelists.  “I’m a 50/50 guy by now,” said the seven time B.A.S.S. winner.  “It’s gotten to where I use braided / or another Superline; like Berkley Nanofil on half of my rods, and Trilene 100% Fluorocarbon the rest of the time.  I carry a spool of 15-pound-test Berkley monofilament with me, but I can’t remember the last time I used it.”

For 100-percent of his spinning applications, Reese uses Nanofil as his main line, then ties a five to six-foot leader of Trilene 100% Fluorocarbon with a Surgeon’s loop knot if the water is clear enough to warrant it.  But if the water is dirty, he ties directly to the Nanofil. For fishing topwater baits, like his Lucky Craft Gunfish, Reese uses Spiderwire Ultimate Braid; which he ties straight to the lure.  For everything from Flippin’ to crankbaits, deep jigs, swimbaits and worms etc.

“There are so many advanctages to fishing fluorocarbons and braids primarily,” he said.  “First, I only have to change my spinning reels when I’ve tied so many leader knots that my spool is underfilled,” he said.  “Second, with Fluorocarbon, I can fill a spool before practice, and never have to strip line every night like I did in the past with monofilament; which deteriorates in the sun.”

In order to get the most out of his line, Reese adheres to a few things.  the most important thing is how he stores his line. He keeps it in an old igloo cooler like you might have at a family picnic; which he stores in his truck.  He said that it helps to somewhat climate control his line enough to keep it fresh.

Another thing he does is to not try and stretch his line when freeing snags.  “Strong pulling takes the little bit of stretch out of fluorocarbon,” he said that makes it brittle.  “When I do need to break off, I point the rod directly at the snag, and make a short, quick snap straight backwards. That helps keep from over stretching the line.”

The other tip he recommended was to not cinch knots too early when tying.  Leave your knots loose until right at the pint they need to cinch down,” he said  “If you make it tight and slide it all the way down to the bait, you’ll see curls, and that means you’ve burned your line.” 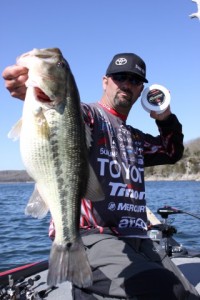 Gerald Swindle
Like many other anglers, Swindle has adopted a lot more use of superlines and fluorocarbons as he understood their benefits.  However, he has not gotten rid of monofilament altogether.  “I’d say that I use fluorocarbon about 60-percent of the time, braid 30-percent of the time and mono the other 10; and that’s only on topwaters,” said the 2004 Toyota Tundra Bassmaster Angler of the Year.  “I’ve just found advantages to using the super powered lines of today more than the older technology of the past.”

Like many pros, and he was one of the earliest to adopt the practice, Swindle uses braided line almost exclusively on his spinning gear, then ties a leader of fluorocarbon to it.  “I spooled up my spinning rods with Sunline SX-1 braid before the Classic, and that line will be there at the end of the Elite Series season,” he said.  “I know that sounds bad, but the SX-1 is such a good braid that it doesn’t really ever wear out, especially when I tie a six-foot leader of Sunline Shooter on the end.”  He uses this configuration whenever he is throwing a dropshot or a Shakin’ head, as he likes to call it.

He uses Sunline’s FX-2 braid for heavy cover Flippin’ and frogging applications, however, the bulk of his fishing is done with Sunline Shooter Fluorocarbon.  “I will spool all of my Quantum reels with Shooter in the week or two before I leave home for a tournament,” he said.  “I will fish those through practice, and then change those that got the heaviest use the day before the tournament.  Once I change for the tournament, I’ll use that line for that whole event, and through practice for the next one.”

He said that anglers should learn to leave a backing on their reels at all times.  He said that almost half of his spool depth is line that will never see the sun, so he leaves that on the spool, then ties the fresh line to that backing material, and spools 100 yards or less of fresh line onto each spool; depending on the technique.

One factor that will force him to change line earlier is line twist.  “If I’m using a War Eagle buzzbait, or a Zoom Super Fluke throughout a day; I’ll change that spool out,” he said.  “Thos types of baits create a lot of line twist, and can make it harder to handle, and weaken it.”

Mark Menendez
This Paducah, Kent. pro tends to focus more on one type of line.  Menendez said that he uses fluorocarbon 70-percent of the time, braid 20-percent and monofilament 10-percent of the time.  “My Seaguar Tatsu is absolutely one of the highest performing lines I’ve ever used,” said Menendez.  “Fluorocarbon line as a whole has presented us with so many positives that it’s hard not to use it everywhere.” 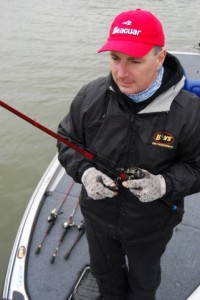 Mark Menendez Uses Fluorocarbon for 70-percent of his Fishing Applications

One of those things that Menendez has found fluorocarbon to be an exceptional partner for is crankbait fishing.  “Crankbaits just seem to come to life more with fluorocarbon,” he said.  “When I tie a Strike King 6XD onto 10 or 12-pound-test Tatsu, I feel every wiggle of that lure, everything it touches and every bass that nudges it.  It’s gotten to where it is so sensitive, that I went back to fishing glass and composite crankbait rods, and along with some of my teammates, have even been working with Lew’s to develop a new crankbait rod series using those materials; fluorocarbon changed the technique that much.”

Like the other two in the panel, Menendez likes to use braid with a leader on his spinning gear.  He differs from the others in that he pays closer attention to his Seaguar Kanzen braid – specifically the smaller diameters – for signs of wear.  “I was dropshotting in vertical trees at Toledo Bend the last time I was there, and my braid got changed out each night,” he said.  “It took a beating on those trees, so I worried about it having weak spots.  When it starts to get a little bit of a ‘yarn-like’ fuzzy appearance, it needs stripped.”  He also suggested that anglers let their braided lines air out overnight, especially in rainy conditions.  He said that he has noticed problems with mildew degrading the integrity of the line as well.”

As far as changing out, Menendez said that he primarily uses line diameter as a guide.  “I will fish 12-pound-test and higher lines for several days; even a couple tournaments, before changing,” he said.  “However, if I am throwing light lines; 10-pound-test and under, then I change them out nightly.  I like to throw small crankbaits like a Strike King Series 3 on 8-pound-test, and while the bait dives deeper and has excellent action, the light line gets beat up.”

One final thing Menendez incorporated into his line management system was Line Rite Rod Tags to keep track of what line he had on each rod.  “I was at the B.A.S.S. postseason in 2009 and had two rods rigged identically other than the line,” he said.  “I picked up the one with 12-pound-test, instead of the one with 20-pound-test, and broke off a nice fish.  That mistake cost me winning a boat at that event, and I don’t want to make that mistake again.”