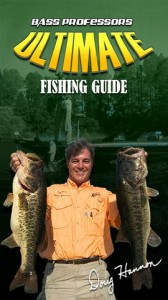 ST. CLOUD, Fla. (June 4, 2013)  – He left us far too soon, “The Bass Professor”™ Doug Hannon passed away unexpectedly March 25th, however his award winning studies and observations from above and below the water’s surface will live on forever.

“The information on this app is never ending it is the closest thing you can get to a college course that I know of. Things I never even thought of are talked about in easy to understand detail.” – T.Ortman

An ardent proponent of the environment, specifically the elimination of spraying of herbicides in our waterways and catch and release fishing, Hannon caught over 800 Largemouth Bass over 10 pounds, wrote hundreds of newspaper and magazine articles, plus several phenomenal books; of which Big Bass Magic, widely regarded by many as the best fishing book ever written, is included in this app.

Doug’s passion was educating people about fishing. “The Ultimate Fishing Guide APP” gives you access to his award winning work and invaluable fishing insights at your fingertips for the low price of $2.99. The amount of content you get on this app would cost well over $50 if individually purchased.

Catch Largemouth Bass in the crystal clear waters of Castaic Lake or hunt for the tropical monsters of the Mekong River, all rendered in beautiful 3D!  With over 50 of the biggest and rarest species ever seen in a fishing game, you need both skill and a little luck if you hope to catch them all! Players can also build their own fishery, stock and breed their favorite species, invite friends, even enter tournaments with players for prizes.

Fishing Paradise 3D is fully cross platform, providing users with seamless gameplay experience. Users can play on iOS, Android and Facebook enabling the ability to start and finish games on the go, regardless of location. Hannon’s expertise was consulted throughout the games development to replicate accurate fish attributes and behavior not seen in other fishing games prompting Android-Apps.com to call it “One of the slickest fishing games we’ve seen.”

“Fully animated environments and intuitive controls make Fishing Paradise 3D one of the best fishing games I have played” – iphoneappsreviewonline.com

Under the expert guidance of the Professor, he’ll teach you everything you need to know from the first time you first pick up a rod and reel all the way to making it pro, with Doug’s help you’ll be landing lunkers in no time! With simple and intuitive controls the game is suitable for players all ages so visit the app store and join thousands of players around the world already building their own fishing paradise!

Any media questions, or for a complementary code for media to download the Ultimate Fishing Guide email to: contact@naturalmotionlures.com