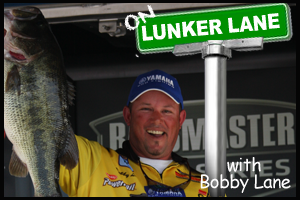 It was a busy offseason for me, but now that I’ve fished an Everstart and a Southern Open, the offseason is officially over. The offseason was one of the busiest I’ve ever had though. With increased visibility and more sponsor support brings more responsibilities, and this year was busy.

I fished with Tony Stewart, the NASCAR driver one day this year, and I as much time as I could working for my sponsors to help them. It was all for good, their support helps me to fish with a clean mind, and I need that.

I fished the Everstart on Lake Okeechobee, and had a bad first day. I’d marked some good beds that I was going to start on, and when I put my trolling motor down I found a new bed with an eight pounder and a four pounder on it. I spent too long on that fish, and by then, most of my other fish had been caught. I recovered and caught one of the heaviest bags of the tournament to move up to 23rd overall. It was a little paycheck that was a good start to the year.

This last weekend was the first Bassmaster Southern Open, and I had a good shot at that one on Lake Kissimmee. I ended up finishing second behind Gerald Swindle, who got his first B.A.S.S. win. I caught an 11-8 whale in the tournament which I found on a bed, and with the earnings and the Toyota Bucks I walked away with $25,000. I would have liked to have won, especially on that lake, which I consider my home lake, but it wasn’t a bad way to start the year out.

For the first time this year, my truck will be wrapped. My Skeeter will still be wrapped in Spiderwire, but my Tundra will be a combination of Spiderwire, RMC Boat Works and the Big Green Egg. That’s going to be a little bit different, but it’s all about making sure my sponsors are visible.

I’m on my way home from Louisiana from picking up my 2011 Skeeter FX and Yamaha 250 SHO. My friend Tony Chachere; whose family owns Tony Chachere’s Creole Seasoning company went to Skeeter and picked it up for me. Me and my son Bobby III stayed the night at his house sampled a little bit of his special Cajun Crawfish and was back on the road home by morning.

When I get back into my Skeeter will be rigged, and I’ll be good to go. They’ll install my MinnKota Fortrex 101, my Humminbirds with Side Imaging, my dual Signature Series Power Poles and the new batteries.

Once that’s all done, I’ll be ready for the FLW Tour Open on Okeechobee that starts next week, and then it’s on to New Orleans and the Classic.