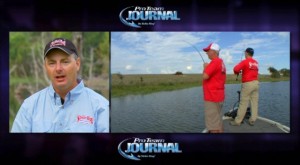 One of Strike King Lure Company’s more unique baits is the Rage Tail Space Monkey, a soft plastic creature type bait that can be used as a Flip bait, a swimming grub and a jig trailer.  while the Space Monkey is one of the company’s most versatile baits, it is also one of the least known.

The pair of anglers show how good and how versatile this unique creature bait is in this episode of Pro Team Journal served up in Rewind style right here on Advanced Angler.