Bassmaster Classic Field Is Filling Up 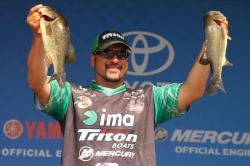 Fred Roumbanis of Oklahoma is the most recent Bassmaster Elite Series pro to be added to the list of 2014 Bassmaster Classic contenders. The competition will be held Feb. 21-23 on Lake Guntersville. Photo by Bassmaster

BIRMINGHAM, Ala. – With the conclusion of the 2013 Bassmaster Elite Series, the majority of the 2014 Bassmaster Classic field is now set. Forty-four of the 56 eventual competitors in the “Super Bowl” of bass fishing have been identified.

The Wild Card – a new event in the Bassmaster lineup – will be held Dec. 7 at Lake Okeechobee, Fla. It is open to Elite Series anglers and pros who fished three or more Bassmaster Opens this year but failed to qualify through those circuits.

Though the field of competitors is not complete, it is already star-studded and rich in history. It boasts seven former Classic champions (including reigning champ Cliff Pace and four-time winner Kevin VanDam) and seven reigning and former Toyota Bassmaster Anglers of the Year (including newly crowned AOY Aaron Martens).

Texas pro Gary Klein will be fishing his 30th Classic (only the legendary Rick Clunn has qualified for more with 32), and Arkansas will be represented once again – as it has been in every previous championship – with at least one competitor. Stephen Browning and Mark Davis (winner of the 1995 Classic) both reside in the Natural State. And for the first time, three anglers born in Japan will be competing, including 2004 champion Takahiro Omori.

Fred Roumbanis of Bixby, Okla., is breathing a sigh of relief. He’s the last of the Elite Anglers to make the cut at this point. One or more of the next three pros in the points ranking could gain entry, depending upon who wins the three remaining Opens. According to B.A.S.S. rules, an angler who wins an Open and fishes all three Opens in a division gains a berth. If he or she does not fish the entire division, or if the winner is an Elite Series angler who is already qualified, the invitation goes to the next Elite pro on the list.

On the watch list are, in order, Jason Williamson of Aiken, S.C.; Boyd Duckett of Demopolis, Ala.; and Brandon Card of Caryville, Tenn.

Here is an alphabetical list of competitors and their hometowns: