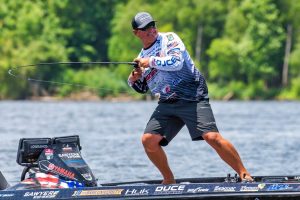 This new series is the product of work between DUCE Rods LLC and one of the most unique anglers in professional fishing.  Crochet, from Pierre Part, La., has made a name for himself over the course of nine seasons on the Bassmaster Elite Series as a power fisherman.  His new series will showcase six power actions – including a highly anticipated frog rod – all built around his fishing strengths.

The highly detailed design process for this series was months in the making and the results of this partnership feature DUCE’s new counter balancing system on three of the six actions.  Unlike most counter balancing apparatus, this revolutionary new system helps distribute the weight throughout the rod blank as opposed to using a heavy weight at the end.  As with other DUCE Rods’ series, the Cliff Crochet Signature Series features Spiral Wrapped Technology as well as high quality components, such as; a Toray Carbon T700 Blank, PacBay Minima Guides, and a custom laser engraved DUCE cork handle.

When asked about the design process Crochet was heavily involved. “This is a true signature series,” said Crochet. Every model was built from the ground up with the exact actions, components, handles, and lengths I wanted; these are the outcome of a great partnership and I’m very happy with them.”
The company is equally as excited to show everyone what they have been working on.  “We took Cliff to the school of rod building,” said Rob Lever, director of marketing for DUCE Rods LLC. “His understanding of the process really helped and we have worked together to produce a series that our fans and the Cajun Baby’s fans will be proud of.”

The Cliff Crochet Series will be featured in this year’s New Product Showcase.  Please visit DUCE Rods at booth 832 to check out this series as well as our other lineups; the ECHO and ELEMENT series.  We encourage all media members to come by and talk to Crochet himself and our executives about the process and actions incorporated into the rods.

Along with getting information about the DUCE Rods LLC Cliff Crochet Signature Series, we will have two exciting giveaways to all media who come by to see the rods and leave their business card.  Everyone will be entered to win the grand prize of a trip to Louisiana to fish with Crochet, and five others will win a DUCE rod.

About Cliff Crochet – Crochet is an Elite Series Angler from Pierre Part, La., and a veteran of more than 100 Bassmaster entries.  In his 10-year career, Crochet has earned nearly $475,000 in competition, has qualified for four trips to the Bassmaster Classic, and claimed victory in 2016 at the Bassmaster Central Open on the Atchafalaya Basin in Louisiana. Along with DUCE Rods, Crochet is sponsored by, Skeeter, Yamaha, Luck E Strike, The Bass University, Bill Lewis Outdoors (Rat-L-Trap),Power-Pole, Lowrance, Seaguar, Santone Lures, Sawyer Products, and Huk.  For more information about Cliff Crochet, visit http://cliffcrochet.com, or contact him by email at info@professionaledgefishing.com. Keep up with Cliff Crochet on Facebook/CliffCrochet, Twitter @CliffCajunBaby and Instagram @CajunBabyFishing.

About DUCE Rods LLC –  DUCE Spiral Fishing Rods are a game changing technology. Made with the industry’s best components, the spiraling eyelet design reduces torque and give you better control of your catch. Designed with passion for the passionate fisherman, our unique line up of rods will leave you wondering why you ever stayed in line in the first place. Visit DUCE Rods online at http://ducerods.com and on Facebook.