Kevin VanDam sits second entering Day Two at the Bassmaster Elite Series Toyota All-Star tournament on Muskegon Lake. He’s soundly in the hunt of victory at just 4-ounces out of the lead. However a whitetail deer has added to the challenges of the home state favorite this week.

Strangely, a dead deer. “After two extremely busy weeks of work, I had one free day at home before coming to this tournament,” explained VanDam. “I was headed to get my haircut when my nephew Jonathon called my attention to a dead whitetail buck near my house that had been hit by a vehicle. When I reached down to grab its antlers and pull its head off the ground to have a better look at it, I totally wrenched my back.” 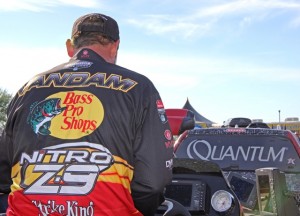 Knowing he needed to leave for tournament practice in Muskegon the next day, he fast added a visit to chiropractor Tim Karmon’s clinic to his previously planned haircut appointment. Dr. Karmon graciously treated the 7-time Toyota Bassmaster Angler of the Year, and realizing the seriousness of the injury, quickly booked a second therapeutic visit before KVD left town.

“Dr. Karmon definitely helped me get in shape to practice and compete, but the boat wakes were still pretty tough on my back today,” 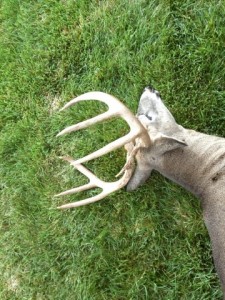 admitted VanDam just before carrying his 14-pound limit to the weigh-in stage.

Once on stage VanDam spoke not of back pain, but instead fireworks and his gratefulness for being there. “This is as close as I’ll ever be to home for a Bassmaster Elite event,” he told the crowd. “We bring our pontoon boat here to Muskegon to watch the fireworks on the 4th of July, but I never dreamed I’d be here for an All-Star event.”

“It’s an all day grind trying to catch a quality fish here, so I just kept hitting spots where I thought I could catch one over 3-pounds,” said VanDam. “I thought if you could average a 13-pound limit the first two days that you’d make the Top 4 cut, but now I’m thinking it might take a little more than that,” he admitted.

“I’d like to catch 17 or 18-pounds, and then we’ll know for sure,” said an always forward-looking VanDam.

Even with an aching back, anybody that knows a flipping stick from a trolling motor wouldn’t dare bet against him. And besides, deer season opens this coming Tuesday in Michigan. He’s looking forward to that too.