The first PAA All-Star event at Lake Ray Hubbard, TX is el Dunno and I’m now in Kimberling City, MO. I finished 8th in the event; which is good, but I should’ve done a lot better. Jason Christie won it and said on stage that he caught every fish that bit all three days. How does that happen??? I can tell you that never happens for me, and this one was no different.

I had 20 pounds on day one but should have had about 22. I lost 10 pounds in two fish on day 2 when I only weighed 11.5 pounds, and on the last day I lost a 6lber and broke off another even bigger than that. I also missed a 3-4 lb fish 4 times and while letting it rest momentarily Ott DeFoe cast in there and caught it. I have to admit that that really made me mad. I had to either sit on that fish, or defend a 6 pounder guarding fry that I missed twice about 100 feet down the bank. As it turned out, neither actually happened, Ott went around me and fished passed that 6lber thankfully, which I caught 5 minutes later.

It’s frustrating to be on the winning fish and not have everything come together. It is such a fine line between winning and losing in this sport, finer than most people think. I watched Jason Christie catch several fish the last day including a big one late in the day. We were fishing the same area, close to where the rivers split. There was a huge laydown tree blown up on the point that split the two rivers, I caught a 5 pounder there on the first day and Jason caught an 8+ there on day two and a 5 the last day, I didn’t fish it the last day because he was leading the event. I’m glad that one is over, I liked the lake, but I hate fishing in a crowd more than anything.

I was throwing a prototype TABU heavy cover jig with a swimbait trailer called a Double Diamond by Optimum. The reason I was losing so many was because I was ripping it and working it erratically and really fast. When fish get as much pressure as they were getting in the river, you either have to slow down or speed up to try to generate reaction bites. Speeding up seemed to be the right deal to me, but unfortunately it made it difficult to get them hooked solidly. I will say that the bites I got this week were some of the best, most violent strikes I’ve ever had. The fishing fans around Garland were some of the best as well, and I had three great observers during the event too. I love fishing in Texas and wouldn’t mind going back to Ray Hubbard in the future, hopefully when the wind isn’t blowing 40mph. 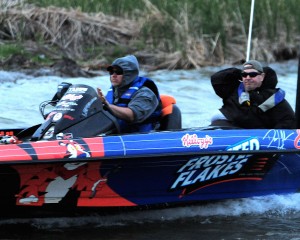 The trip to Kimberling City was a little scary on Easter Sunday. It was raining so hard that the roads between Beaver Lake and Table Rock were flooded in several places. I even saw a bridge washed out in Eureka Springs. Everything is flooded down here, I drove over the Kings River on the way to The Light House Lodge and it looked ugly. This place is going to be pretty high for our tournament next week I think, I just hope they don’t pull the plug on it during the event like they did at Chickamauga a couple weeks back. It is going to be interesting though to see how it all plays out.

Anne and the kids will be meeting me down here on Thursday night. Mitchell has been sick with some kind of flu for the last 3 days; I wish I could be there for him. This is the longest I’ve ever been away from Mitchy and Macy so I can’t wait until they get down here, only a couple more days. My practice on Table Rock doesn’t begin until Sunday, so we have a little time to just relax and maybe see some attractions in Branson.

I’m hoping for another top 10 at the Rock next week. I will talk to you after practice is over just before the tournament starts and let you know how I feel about it. Until then, you can keep in touch with me on Facebook!