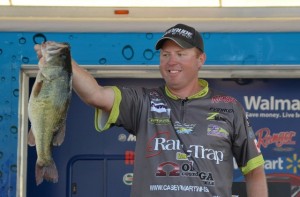 DAYTON, Tenn. (June 29, 2013) – Rookie pro Casey Martin of New Hope, Ala., maintained his lead at the Walmart FLW Tour at Lake Chickamauga presented by Chevy Saturday by bringing a five-bass limit to the scales that weighed 23 pounds, 3 ounces. Martin’s three-day total of 15 bass for 73-2 gives him a substantial lead over hard-charging local Michael Neal of Dayton, Tenn., who brought five bass to the scales weighing 22-8. Neal’s three-day total of 62-12 puts him 10 pounds, 6 ounces shy of Martin heading into the final day of competition in the tournament that features the world’s best bass-fishing anglers competing for the top cash award of up to $125,000.

“They’re getting real hard to catch,” said Martin, whose only previous top-10 finish as a pro on the FLW Tour came at Lake Okeechobee in the first event of this season. “I think that the fish are getting used to what I’ve been giving them. I’m still seeing them on my graph – they’re still there. It’s getting tougher to make them bite.”

Martin returned to his big school of bass that he has fished all week on Saturday, but was forced to switch to a spinning rod after a tough morning.

“The big switch for me was moving to the drop-shot rig,” Martin said. “That seemed to be what they wanted today.”

Martin said his drop-shot rig consisted of a green pumpkin-colored Roboworm on 10-pound-test Seaguar Invizx line. He said that four of his fish that he weighed in came via the drop-shot rig, including his 7-pound kicker bass. He also weighed in one bass on a Picasso School-E-Rig, which he threw rigged with Gene Larew Sweet Swimmers and Strike King Shadalicious swimbaits.

“I don’t have a whole lot else to go with,” Martin continued. “Tomorrow, I might stay there all day and end up going down with them. I’ve got one other spot that I can hit intermittently, but I’m going to stick with the school that got me here.

“Two things can happen to me tomorrow. Either I am going to win, or I’m not. That’s it. I’m not going to change up and go look to catch 10 pounds on the docks. I’m going to have a lot of different gear tied on tomorrow, and I’m shooting for the win.”

The top 10 pros advancing to the final day of competition on Lake Chickamauga are:

“I had to hustle this week,” said Reagan, who will fish the third Forrest Wood Cup of his career as a co-angler this season. “I drew three great pros. Chris Baumgardner on day one is just a great guy to fish with. Friday, I drew a guy I knew from back home, John Devere. I was familiar with John’s style of fishing, and that played to my advantage. I drew Casey Martin today, and he is on a big school of fish.”

Reagan said that he caught most of his fish on day one on a Zoom Speed Worm. On day two, he switched to a shaky-head rig and caught the largest stringer of the day in the co-angler division. On the third day of competition, Reagan opted for a drop-shot rig and slammed the door on the first FLW victory of his career.

“This has been a long time coming,” Reagan said. “I’ve always wanted to fish on the pro side. I don’t have any grandiose delusions about competing against these pros. Most of them are far, far better than I. But, I’m not getting any younger. I’m going to take this win as a sign, and I plan on making the jump over to the pro side next year.”

In addition to the top award of $25,000, co-anglers were also fishing this week for valuable points that would help them qualify for the 2013 Forrest Wood Cup presented by Walmart. The top 35 co-anglers in the point standings from the six events on the 2013 Walmart FLW Tour have qualified.

The top 10 pros will take off from the Dayton Boat Dock located at 175 Lakeshore Drive in Dayton at 6:30 a.m. on Sunday. Sunday’s final weigh-in will be held at the Walmart located at 3034 Rhea County Highway in Dayton beginning at 4 p.m.

Fans will also be treated to the FLW Outdoors Expo at the Walmart on Sunday from noon to 4 p.m. prior to the final weigh-ins. The Expo includes Ranger boat simulators, the opportunity to interact with professional anglers, enjoy interactive games, activities and giveaways provided by sponsors, and fans can learn more about the sport of fishing and other outdoor activities. All activities are free and open to the public. Also on Sunday, country music artist Dylan Scott will perform a free live concert on the Walmart weigh-in stage at 3 p.m.