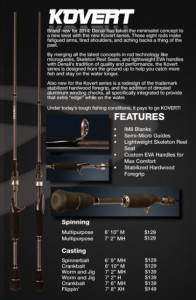 Mountain Home, AR – Premium rodmaker Denali Rods has announced the release of an all new line of technique specific rods that will debut at ICAST 2013. The Kovert Series consists of eight cutting-edge models (six casting and two spinning) designed in the latest actions and lengths.

Denali Rods president Scott Estes thinks that the Kovert Series will be a huge hit with anglers right away, saying “The Kovert Series has been designed from the ground up to be the best rod available in its price range. They feature a whole host of in-demand features like Skeleton reel seats to reduce fatigue and micro guides for optimum casting performance. We worked extremely hard to create a phenomenal rod and keep it at that $130-$150 price point, which is affordable for anglers of all skill levels.”

In addition to the minimalist features, the Kovert Series lineup is also equipped with lightweight EVA foam grips, a new take on the Denali trademark stabilized hardwood foregrip, and they are built upon extremely sensitive IM-8 graphite blanks.

Founded in 2009, Denali has seen a rapid rise in sales and exposure despite a tough economy. That success is a testament to the company’s dedication to quality, product development and customer support. Denali offers four complete lines of quality rods starting at $99 and their rods come with a limited lifetime warranty against material and workmanship defects. For more information about Denali Rods, go to www.denalirods.com.