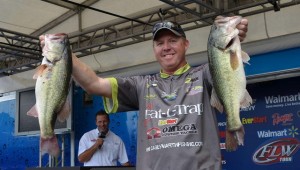 DAYTON, Tenn. (June 28, 2013) – Walmart FLW Tour competitors awoke Friday to a thick blanket of fog covering Lake Chickamauga. After approximately a two-hour delay, anglers were allowed to start day two of the Walmart FLW Tour at Lake Chickamauga presented by Chevy. Pro Casey Martin of New Market, Ala., vaulted to the top of the leaderboard after bringing a five-bass limit to the scales weighing 27 pounds even. His two-day total of 49 pounds, 15 ounces gives him a comfortable 7-pound, 9-ounce lead over Chevy pro Larry Nixon of Bee Branch, Ark., heading into the third day of competition in the four-day tournament that features the world’s best bass-fishing anglers casting for the top cash award of up to $125,000.

“I came here just wanting to have fun,” said Martin, who is fishing his rookie season as a pro on the FLW Tour. “I am on the borderline of whether or not I will qualify for the Forrest Wood Cup, and today I was blessed. This morning I ran to my first spot and was catching them on every single cast. It was awesome.”

Martin said that he started fishing the same water that he did yesterday, a 15-foot ledge that comes out off of a bank with a steep break on one side of it. He said that he shared the area with multiple anglers and was forced to fish in the crowd.

“Everyone wants their spots to themselves, but coming up from the co-angler program really helped me,” Martin said. “I’m used to having to catch them behind the Mark Rose’s and J.T. Kenney’s. I didn’t mind fishing in the crowd.”

Martin said that he caught a limit on a Picasso School-E-Rig at his first area. For the rest of the day, he said he alternated between a Ozark Special-colored ¾-ounce Omega Custom Tackle Football Head jig and a Strike King Lures Sexy Blue Back Herring-colored 10XD crankbait.

“They will only bite the School-E-Rig at my first spot,” Martin continued. “I caught around 17 pounds, and then I went to my second area. I caught a 6- and 7-pounder right away and got out of there. I’m going to try to save them for Sunday, if I make it. I haven’t seen anyone else fishing it, so we’ll see.

“When I made the cut at Okeechobee, I was star struck and just happy to be in the top 20,” Martin went on to say. “Now that I’ve bombed a few times, I want to win.”

The top 20 pros that will fish Saturday on Lake Chickamauga are:

Martin won Friday’s 3M ScotchBlue Big Bass Award on the pro side with a fish weighing 7 pounds, 11 ounces to win the $500 prize.

Anglers were also vying for the prestigious 2013 Walmart FLW Tour Angler of the Year presented by Kellogg’s title that is determined by the most points accumulated over the six Tour events in 2013.

Andy Morgan of Dayton, Tenn., wrapped up his season-long quest for the Angler of the Year title in front of his hometown crowd on Friday. By advancing in the top-20 to the third day of competition, Morgan clinched the first Angler of the Year title of his career after finishing in the top 10 in each of the last seven FLW Tour seasons. Morgan, who received $100,000 for the title, also will receive an automatic berth into the 2014 Forrest Wood Cup.

Drew Benton of Panama City, Fla., was awarded the 2013 FLW Tour Rookie of the Year award Friday, which is awarded to the rookie pro angler who finishes the season with the highest point total.

Co-angler Richard Peek of Centre, Ala., clinched the 2013 Walmart FLW Tour Co-Angler of the Year presented by Kellogg’s title with his 31st-place finish. For winning the prestigious title, Peer earned a new Ranger Z518 with a 200-horsepower Evinrude or Mercury outboard plus an automatic berth into the 2014 Forrest Wood Cup.

Anglers will take off from the Dayton Boat Dock located at 175 Lakeshore Drive in Dayton at 6:30 a.m. each morning. Saturday and Sunday’s final weigh-ins will be held at the Walmart located at 3034 Rhea County Highway in Dayton beginning at 4 p.m.