With a startling display of force, Lynchburg, Va. FLW Tour pro David Dudley closed out his third (2008, 2011 and 2012) FLW Angler of the Year title on Saturday. 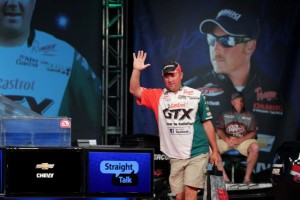 Entering the final event of the 2012 season with a razor thin, one-point lead over Jim Moynagh and an eight point lead over Jacob Powroznik. Dudley sent notice to his competitors that he was serious on day one when he posted a 24-pound limit at Lake Champlain, and although he didn’t run away from eventual runner up Powroznik at any point during the week, he certainly showed no mercy to any of his competitors by grabbing the early lead, and eventually winning in wire-to-wire fashion.

Champlain was Dudley’s seventh victory in FLW competition since 2002 and pushed his career FLW earnings to over $3-million. The final story of the tournament will show that the veteran pro went against the grain of the event by heading north instead of south and used a combination of shallow water power techniques and deeper water finesse techniques to win.

The win was Dudley’s second of the 2012 season; he notched his first win of the 2012 campaign at Beaver lake in April, then followed it up with his commanding win this past weekend at Lake Champlain. By winning a pair of events in the 2012 season, Dudley joined elite company on that front. He became only the fifth angler to have won more than one event in the same FLW Tour season. Along with Dudley, Florida’s Steve Daniel did it in 1996, Missouri’s Rick Clunn notched two wins in 2000 and National Guard pro Brent Ehrler, from Redlands, Calif. became the fourth to do it in 2010. Only Lexington, N.C. pro David Fritts has ever won three events in the same year; he accomplished that in 1997.

Dudley’s wire-to-wire win in New York was his fifth win on the FLW Tour competition, which places him in a tie Fritts for the most wins in FLW Tour competition. The $125,000 paycheck that came with winning Champlain boosted his FLW Tour Level earnings to $1,953,910, which is likely to put him at the top of that category.

Also, just in case the legacy of winning events and cashing hefty paychecks wasn’t enough, Dudley winning his third FLW Tour Angler of the Year trophy places him as tops in that category as well; in a tie with Clark Wendlant of Leander, Tex., who won the award in 1997, 2000 and again in 2009. 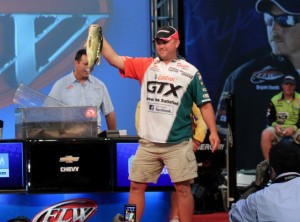 Advanced Angler’s Tom Leogrande caught up with him as he had wrapped up his Angler of the Year title and as he was getting his gear ready for the final day of the Champlain event. We wanted to find out what AOY number three meant to him; where he thought it put him in the history of FLW and what plans he had going forward.

Throughout the interview, it became clear that Dudley was intently focused on the task at hand. While other anglers might have been justifiably distracted with the title they had just earned; Dudley remained focused on closing out the win at Champlain. He initially spoke about trying to focus on the tournament at hand. “It’s hard for me to really stop and think about winning number three,” he said. “I’ve really got this event on my mind. I’ve got one more day to go to try and win this event, and that’s kind of where my mind is at.”

With a little more conversation, Dudley began to open up his thinking about the Angler of the Year title, however. “Number three is kind of a big deal, I guess,” he said. “I know that it ties me with Clark (Wendlandt, for the most AOY titles), but I’m still not the leader because we’re tied, it’s a big step towards being the leader in the record book, but I’ve still got more work to do if I want to be the leader.”

Surprisingly, for someone who has earned three Angler of the Year crowns, Dudley said he doesn’t think about the title throughout the year. “I don’t really concentrate on winning the angler of the Year as a focus,” he said. “If I go out and fish right and win events, then those titles happen on their own. I didn’t really think about it until we were here and things started out well so that I could think about what to do to win it. It kind of becomes hard not to in those last couple of days; you kind of have to think about strategies and how to make sure you can do it.”

He also said that winning number three wasn’t any easier than winning either of his other two from an actual competition standpoint, but there were other parts that were. “The level of competition increases every year,” he said. “The one thing that does become easier is dealing with the mental part of the title. It becomes easier to deal with the pressures and the stress of being in contention for it at the end of the year; that part does become easier.” 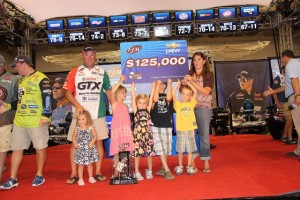 He also spoke about the level of competition in a little more depth. “I know that I’ve gotten better as an angler because I’ve had to,” he said. “There’s no doubt in my mind that if I had stayed at the skill level I operated at in 2008; when I won my first AOY title, I would have struggled to make the Forrest Wood Cup this year. The level of competition has increased, so we have to as well to stay at a high level.”