This week marks the start of the 16th FLW Tour Championship known as the Forrest Wood Cup. Named after Forrest L. Wood, the FLW Outdoors championship event will pit 58 FLW pros in competition for the $600,000 top prize that will be awarded the winner.

This year’s event returns to a symbolic place for FLW Outdoors, and all of bass fishing; Lake Ouachita, outside of Hot Springs, Ark. Lake Ouachita was the site of the 2007 FLW Cup; which was won by Bryant, Ark. pro Scott Suggs. Along with being Suggs’ second FLW Outdoors win, the event was noteworthy because it awarded the winner $1million; $500,000 for the championship, and $500,000 in Ranger bonus money. 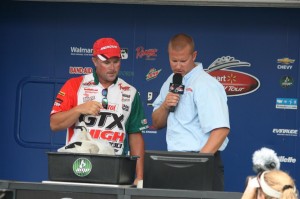 Ouachita is the largest lake in the state of Arkansas. It covers some 44,000 surface acres, and because home construction is not allowed on the lake, it is touted as one of the cleanest lakes in the country.

Like many lakes throughout the South, Ouachita will be a challenging fishery; with anglers working frantically in the early hours in search of a topwater bite, then turning to subsurface presentations after the early morning hours.
Weather for this week’s competition is expected to be hot; with overnight lows in the mid 70’s and highs averaging the mid 90’s and heat indexes that are expected to be as high as 105 through the weekend. At current, Lake Ouachita’s water level is right at 20 feet low from its full pool level of 592 feet of elevation

Past Events at Ouachita
There have been two major events on Lake Ouachita in the past five years; the already mentioned FLW Cup Championship won by Suggs, and the 2010 FLW Tour event won by Redlands, Calif. pro Brent Ehrler. Ehrler used a topwater bait primarily en route to his victory; however, because that event was in May of 2010, the patterns he used won’t likely factor into the event this week. 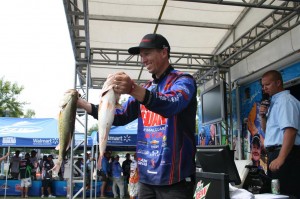 Ehrler reportedly figured his winning program out on the second day of the competition. After bagging a solid limit; he decided to search for more areas, and he threw a Lucky Craft Kelly J and a Brian’s Bees topwater bait as he moved quickly through shallow bays. What he realized was that bass would continue to strike at the surface lures, so he kept throwing them; the result was his second FLW Tour Win of the season.

Suggs relied on patterns that will likely shed some light on the tactics that anglers will be using in this year’s Forrest Wood Cup Championship. Suggs relied heavily on two techniques; slow rolling a spinnerbait through standing timber, and followed up by a 10-inch worm on offshore structure to fill out his limit.

Suggs used a 3/4-ounce War Eagle spinnerbait to count down to the 25 foot level where he found bass suspending in the standing timber. The fish were hovering over water that was anywhere from 40 to 80 feet in depth. He also used the big worms to fill out his limit each day. His final day only produced two fish, but after building a four pound lead, his two fish bag; which weighed 6 pounds, 1-ounce, was enough to give him a 4-pound, 9-ounce margin of victory. 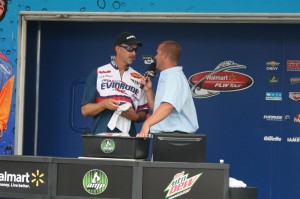 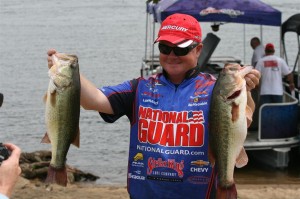 Who to Watch
Several of the pros have been competing on a high level coming into the Forrest Wood Cup, and should be a threat to win the event.
David Dudley, fresh off of his second FLW Tour Angler of the Year, is widely regarded as one of the top anglers in the business today.
Brent Ehrler, another angler who receives consideration as one of the best in the sport could also be a threat. Dave Lefebre is a very versatile angler who puts in the long hours could also be a factor.
Mark Rose has proven that he can win offshore and has been fishing at the top of his game.
Andy Morgan is a perennial threat at any FLW event he enters
Shin Fukae is one of the hardest workers on tour; expect him to be prepared

Sentimental Picks
Jay Yelas is a Forrest Wood Cup win away from claiming all four major titles in the sport. He is a former Bassmaster Classic Champion and Bassmaster Angler of the Year. He has also won two FLW Tour Angler of the Year titles, and a win would give him bass fishing’s Grand Slam of titles.
Larry Nixon will be a fan favorite; from Bee Branch, Ark. Nixon has refined his deep water structure fishing over the years, and if he gets on them, would rock the fishing world with a win.