Like yesterday when Kevin VanDam willingly changed-out Davy Hiteâ€™s hooks moments before the first cast of the day, the brotherhood thatâ€™s as much a part of this sport as high horsepower outboards became hugely apparent once again.

Far beyond their mutual residency in â€œThe Palmetto Stateâ€ South Carolina pros Marty Robinson and Casey Ashley share a lot in common. Seldom will you see one without the other. Not only are they traveling roommates on tour, they also convoy their Toyota Tundras from one tournament to the next, and can often be found picking guitar and singing country music to relax after a long day on the water. Plus, both have a penchant for laughing out loud. 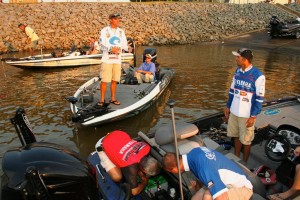 But at 6:30 this morning, nobody was singing or laughing when Robinson discovered moments before blast-off that his trolling motor had no juice. Robinson is in contention to make his first Bassmaster Classic in five grinding years on tour. But with lock and dam operators threatening to close the gates along Martyâ€™s riverine path to another solid day like yesterday, stress levels skyrocketed from the reality that one bad day out here can crush a dream season.

As five guys from the ever heroic Bassmaster Service Crew pounced aboard Robinsonâ€™s boat and checked every wire, fuse, breaker and the trolling motor itself â€“ arguably it was Casey Ashley that saved the day when he told Marty, â€œMarty, Iâ€™ve got a spare trolling motor in the back of my truck, take my keys, run up there to the parking lot, and get it.â€

Robinson took Caseyâ€™s keys, sprinted toward the parking lot in his flip-flop sandals, and returned with Caseyâ€™s Tundra, along with the brand new back-up trolling motor Casey promised. Robinson who is mechanically inclined to the point of operating his own plumbing business with wife Iris when not on tour, assisted in the installation, and 15 minutes after every other boat had blasted off, Marty idled into the current of the Arkansas with a smile on his suntanned face â€“ because once again, brotherhood trumps bad wires or temperamental trolling motors.