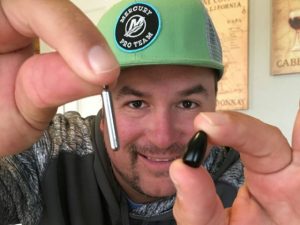 Roumbanis said, “Tungsten really has changed fishing over the past decade. Tungsten is more dense than lead allowing anglers to use heavier weights in a smaller profile. In addition, Tungsten is harder than lead which makes a better sound when striking rock or structure. I believe the smaller size along with the better sound gets me more bites. Every tour angler knows Tungsten is better than lead, but it has also been a lot more expensive. Swagger Tackle has narrowed the gap between the pricing of lead and Tungsten and done it without sacrificing any quality, making it a solid option for weekend anglers. I like that!”

Swagger hopes adding Roumbanis to the team can help spread the word about their products quality and cost effectiveness. “We know Fred will do a fantastic job helping Swagger Tackle bring our competitively priced lineup of Premium Tungsten flippin’, worm, dropshot and nail weights to fellow anglers across the nation,” said Travis Nadeau owner of Swagger Tackle.

Swagger Tackle premium Tungsten weights are available at Tackle Warehouse or at SwaggerTackle.com, but additional retail outlets are being added soon.