I took a chance to go salmon fishing last week with my friend Roy Gray; heâ€™s the Lucky Craft rep in our area. We went out on the American River, and caught nine or ten fish. We went out with Vance Staplin, and he put us right on the fish.

The trip was a lot of fun, and we brought home some salmon for eating, and I was able to get some roe to get ready for my steelhead outings later this winter. 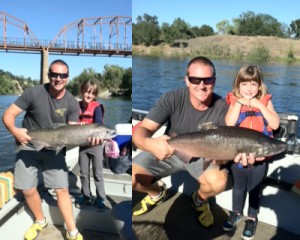 I had so much fun, that I booked a trip to take Kim and the girls out with another guide, Brad Bugica a couple of days later. The American River is absolutely full of salmon right now, and Brad proved it by pulling across the river, to the first spot, and within 30 seconds was hooked up with a fish. He handed the rod to Lea, who fought it for a while and while she was fighting that one, they hooked up again and handed the rod to Courtney, who fought it for a minute before losing it.

Lea landed hers, and it ended up being the biggest fish of the day â€“ about a 15-pounder â€“ and we all went crazy when she landed it. By the end of the day, Lea had reeled in five fish and Courtney had reeled in four of her own. They were exhausted from all of the hard work, but they had a blast.

They had so much fun we booked another trip for Kim and the girls to take their grandma and grandpa on the river later this week. That will be a lot of fun too.

We brought home a bunch of fish from that trip and we were able to share it with friends. My buddy smoked some for us too. But, by far the highlight of the experience was the Salmon cook off that Kim and I had here at the house.

We both got to mix our own salmon patties and the girls and our friends were the judges. I put Creole seasoning, Worcestershire sauce, mayonnaise, parmesan cheese and a few other things in there and cooked mine up. I donâ€™t remember exactly what Kim put in hers, but it was really good.

In the end though, I was able to come out with the big win – by a vote of my peers â€“ and I was really proud. Iâ€™m thinking about writing a cookbook â€“ NOT!

Anyway, it was a good week; Iâ€™ve got a trip with some of the guys from Wright & McGill Co. to go to Boston and go after some giant striper. Iâ€™ll let you know how it goes.